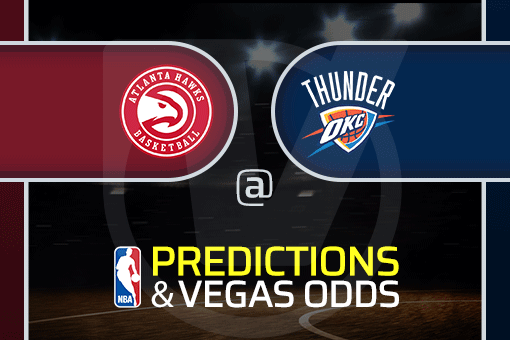 If you’re in search of the latest NBA betting odds and Hawks vs Thunder prediction, look no further because Vegas Odds has you covered.

The Hawks five-game winning streak ended recently and they have lost two in a row entering this contest.

The Hawks’ hot streak ended with two losses in a row, one against the Hornets and the other against the Bulls. Prior to that, Atlanta had won five straight and seven of nine, so they were starting to figure things out.

The Trae Young-Dejounte Murray duo has been fascinating to watch, and the pair of guards average 47.9 PPG with 16 assists.

It has worked wonders in Atlanta, and the Hawks have crawled back to the .500 mark with a strong month of January.

The Thunder have also played well this month, putting up a 9-3 record and winning five of the last six games.

The Thunder just stunned the Denver Nuggets on Sunday with a 101-99 victory, and Shai Gilgeous-Alexander played hero with the game-winning bank shot to stun the Denver crowd.

Trae Young and Dejounte Murray against Shai Gilgeous-Alexander and Josh Giddey is an exciting matchup of young, up-and-coming guards. Both of these teams have played well lately, and the Thunder are one game below .500 but flirting with a playoff spot, surprisingly.

SGA and Giddey play well, but Young and Murray play a little better and get a close victory in OKC.