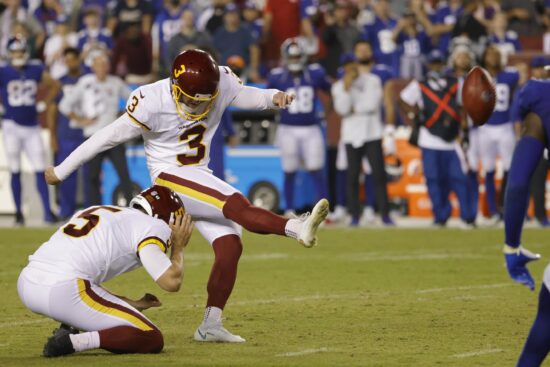 We need to say that WFT won after a thrilling ending and that the Giants had a nice chance to continue their unbeaten streak against the division rivals, which saw them winning five consecutive events.

Taylor Heinicke was the man in the middle, as he almost cost the hosts a win. In the end, Washington got a win after a repeated field goal Dustin Hopkins made.

The 30-year old kicker missed his first attempt to clinch a win for the home team. Hopkins’ 48-yard attempt was wide, but he suddenly got a second chance because of Dexter Lawrence’s penalty, which not only gave him another try but also shortened the distance between for five yards.

This was a very lucky outcome for the home team, who was on the verge of wasting what was supposed to be an easy closure of the game.

At 2:22 before the end, the hosts lost the football; that is, Heinicke threw an interception just 20 yards before his end zone. Fortunately, Daniel Jones and the Giants won just three yards, and New York had to settle with a field goal that gave them a two-point edge, 29-27.

Fast forward two minutes and 50 yards down the field, Hopkins was in the main role. You know the rest.

As for Heinicke, he threw 336 yards for 2 TDs, and one picked and was sacked just once. His overall performance was at a pretty good level, and we just might say that the Football Team got a decent QB.

The Cowboys are the top favorites to win the AFC East division, +125, and the franchise from Washington comes next at +260.

Ron Rivera’s side reached the playoffs last year, but the bookies don’t believe they might do the same this year. The odds on WFT to see the postseason are +145, and for them to miss it -175.

Giants in Problems Early On

The Giants’ odds are pretty discouraging for their army of fans. Reaching the playoffs is priced at +225, and the opposite is at -275.

Saquon Barkley played yesterday, and the only thing it came out of that big risk was proof that he still didn’t reach his top level. Only 57 yards on 13 carries are pretty mediocre for him, despite the average being above 4 yards per carrying.

New York experienced another blow caused by an injury. OL Nick Gates broke his leg in the first quarter and was carted off the field. To make it even worse, he was replacing Shane Lemieux, who was on the injured reserve list, at the left guard. Gates’ natural position is center.

Evan Engram, Cam Brown, and now two OL players, Lemieux and Gates, are out, and that only makes things more complex for the head coach Joe Judge. The Giants host the Atlanta Falcons in Week 3.