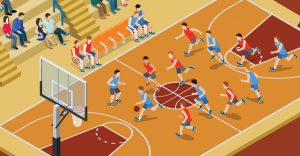 The Hornets had a week to remember. They went 3-1 and saw some historic performances from their players. Let’s analyze a little.

Following a loss to the 76ers on Monday, just about everything went right for the Hornets. It’ll be a disappoint end to the season as they miss the playoffs for the second consecutive year, but they had a few things to smile about this week.

It’s been an extremely up-and-down season for Dwight Howard in Charlotte this season, but Wednesday was a day where nothing could go wrong for D12. He played 34:02 on the night, and posted a stat line that had not been seen in over eight seasons.

On this night, however, it was all about Dwight. The team trailed big early on, and ended up with a win. Howard however, did pick up his 16th technical on this day and had to miss his first game of the season against the Grizzlies. He returned triumphantly posting 18 points and 23 rebounds in 33 minutes of action in a victory against the Dallas Mavericks on Saturday.

Kemba has a night to remember:

Who said you need to play four quarters to go off? Kemba Walker didn’t get that memo, and on a night when his team picked up the sixth biggest margin of victory in NBA history, Kemba made his mark.

Walker shot an astounding 13-18 from the floor (10-14 from three), and put in 46 points in just 28 minutes of action. Every time he got the ball he was looking to put the ball right in. We’ve seen bigger performances from Kemba than the night he had against Memphis, like when he scored 52 against the Jazz a few years ago, but he can flat out ball.

There were some who doubted Kemba’s ability when he came out of UConn due to his small frame, but he’s been an All Star, he’s guided his team to the postseason, and he’s showed himself to be a legitimate leader. This is the 3rd year of a 4-year $48 million deal that he signed before the 2015 season, a massive bargain on this PG market based on current player salaries. He hasn’t complained (publicly) ONCE about his salary, showing how much of a team player and leader he really is. Expect the Hornets to be back in the postseason in 2018-19.

Hernangomez gets in on the act:

The Spanish big man hadn’t seen many minutes since coming from the Knicks, but with Cody Zeller out of the lineup, that changed this week. In four games, Hernangomez averaged 8.75 points, 7 rpg, and 1 BPG, in about 16 minutes a night over four games. He scored 15 points against Joel Embiid and the 76ers in the 2nd quarter alone on Monday night.

In the team’s historic 51-point win over the Grizzlies, he posted only his 2nd double-double of the season, and first since Dec. 4, when the Knicks played the Pacers. He looks to keep his strong play going as the season winds down, as he’s finally getting the minutes he craved so much in NY, here in Charlotte.