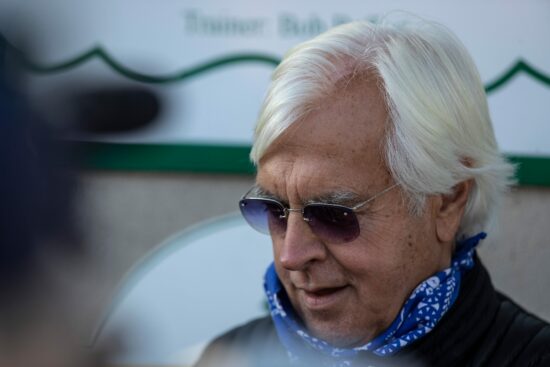 Bob Baffert kickstarted May by making history and becoming the all-time winning trainer in the Kentucky Derby. However, the last couple of weeks have been deeply damaging for his reputation.

Another blow was landed on Monday evening, as it was announced by the New York Racing Association that he would be suspended from making entries to tracks in the area. That means that Baffert could be forced to sit out the final Triple Crown race of the season, which is due to take place at Belmont Park on June 5th.

There was somewhat of a backlash last week, as Preakness Stakes officials allowed both of Baffert’s runners to compete in the second Triple Crown race of the season. Officials stated that they would regularly test all Baffert horses in the lead up to the races that took place at Pimlico last week.

All tests came back clean. Medina Spirit’s involvement was still questioned in all corners. Still, organizers avoided the ultimate embarrassment of the Baffert-trained horse winning the race, as he finished in a distant third, five and a half lengths behind Rombauer, who was the shock winner. The NYRA have been harsher with their position, as president, Dave O’Rourke, has admitted that the reason behind the decision was to ‘put the integrity’ of the sport at the forefront. The full statement from the NYRA can be found below:

What Does This Mean For The Belmont Stakes?

The final Triple Crown of the season is the Belmont Stakes, which takes place on June 5th at Belmont Park. The stance by the NYRA means that it is unlikely that Baffert will be able to have a runner in the race, nor any of the other races that are taking place during the meeting. Furthermore, the NYRA have stated that they will not look to reverse their decision until the result of the second test has come back.

Baffert has already fought a suspension this season, as he was able to reverse the 15-day suspension that was imposed following a positive test by Gamine. The decision was reversed last month, but it’s difficult to say at present whether the NYRA will be as lenient.

The Belmont Stakes will certainly still go ahead, and the betting market is already looking extremely interesting. Essential Quality is the horse at the top of the market for trainer Brad Cox, as he looks to bounce back after losing his perfect record in the Kentucky Derby. Preakness Stakes winner Rombauer is currently the second favorite in the betting, while Louisiana Derby winner, Hot Rod Charlie is also prominent. An interesting case could also be made for Kentucky Oaks winner, Malathaat, who will be looking to become the first filly to win the race since Rags to Riches in 2007.