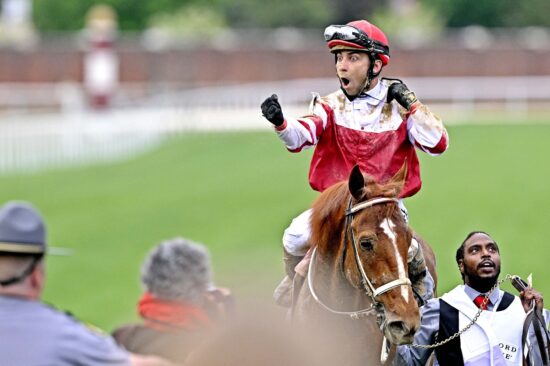 There is nothing like the Kentucky Derby, and horse racing fans will already be counting down the days to the special occasion at Churchill Downs on the first Saturday in May. However, the build-up to the opening Triple Crown race of 2023 gets underway in 2022, as the Road to the Kentucky Derby 2023 gets underway. You can learn more about the prep races and keep up to date with the recent winners here.

The latest Vegas odds for the Kentucky Derby aren’t yet available. Bookmark this page and check back at a later date to see the updated odds.

Road To The Kentucky Derby Information

The number of points varies depending on the grade of the race, with some of the most lucrative being the Santa Anita Derby, Wood Memorial, and Blue Grass Stakes, which will take place early in 2023. Only eight races on the Road to the Kentucky Derby 2023 schedule offer 100 points, which will almost certainly assure a runner of a spot in the race at Churchill Downs.

However, the majority of races taking place in 2022 will offer just ten points, while the Breeders’ Cup Juvenile offers 20 points. Three different routes are available on the Road to the Kentucky Derby 2023: the Prep Season, Championship Series, and the European Road. Below, you can find out the races, dates, and points available for each.

The vast majority of the Prep Season races are run by Kentucky Derby hopefuls when they are aged two. However, eleven races are run by this year’s crop after they turn three. The races involved in this section can be found below.

The big races on the Road to the Kentucky Derby come in the Championship Series events, with even the smallest races offering 50 points to the winner. Races during this leg can be found below.

While the vast majority of races on the Road to the Kentucky Derby are staged in the U.S., there are also several opportunities for European-trained runners. However, these races very rarely point towards likely runners at Churchill Downs.

The biggest Kentucky Derby contenders won’t be seen until the biggest races are staged in early 2023. However, some races that may be worth examining have proved to be solid prep races with Derby winners emerging. For example, the Florida Derby has seen 20 Kentucky Derby winners pass through that race, while Santa Anita Derby has produced three winners of the opening Triple Crown race in the previous six years.

However, some of the most illustrious races have poor records in the Derby. Those include the Blue Grass and Wood Memorial, which have yet to produce a Derby winner in over ten years.

Before finding the selection to make your Kentucky Derby 2023 wager, it could be worth examining the path some recent winners took. It is also worth mentioning that the +8200 winner from the Kentucky Derby 2022 Rich Strike, passed through prep races that no previous Derby winner has gone through.