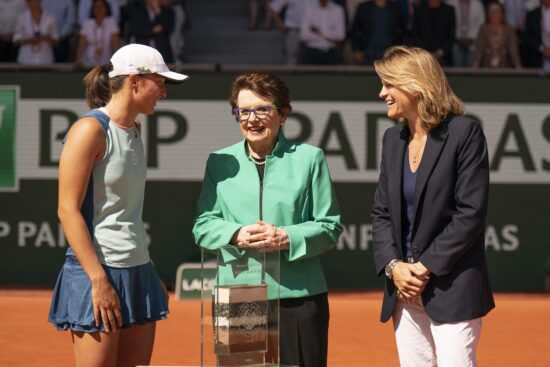 Saturday’s match between Iga Swiatek and Cori Gauff is a battle for the 2022 French Open title. Swiatek, who is the #1 player in the WTA Rankings is defending her title against the #23 player in women’s tennis, Cori ‘Coco’ Gauff.

Still, the history of the women’s singles tournament at the French Open teaches us that surprises do happen. So, the big question is can +500 underdog Gauff prove top tennis bookmakers wrong?

Iga Swiatek Is the New Queen of Clay?

The 21-year-old Polish superstar has been sitting on the WTA throne since April 4 and will stay there for at least a few more months. The thing is that she’s got more than 2,000 ranking points than the player behind her in the WTA Rankings. What this means is that even if she loses on Saturday, she won’t be thrown from her throne.

But she probably isn’t going to lose. At least that’s what her Vegas odds of just -667 suggest. If you’re wondering why they’re so short, the main reason is that Swiatek has been brilliant since the start of the year, winning 43 matches, while losing just three.

The most impressive fact is that her most recent loss happened back in February. Since then, she’s 34-0, with 15 of those wins happening on the clay court. The reason why this fact is important is that the French Open is using the same kind of playing surface.

Knowing this, you understand why the only Grand Slam tournament she’s won so far in her professional long career is the one played at Roland Garros. Sure, she’s great on other surfaces as well, but clay seems to be her favorite turf.

Still a teenager, Gauff has a chance to become the right-youngest Grand Slam winner in history. Judging by what we saw from her so far in the French capital, such a scenario doesn’t seem impossible. So far, she’s won every match in straight sets. Knowing all this, you might be wondering why the Vegas odds are heavily in favor of her opponent?

One reason is that Coco Gauff still hasn’t played against such a high-profile player as Swiatek in this tournament. In fact, the highest-ranked player she’s beaten since the start of the 2022 French Open is Elise Mertens. The Belgian player was in the #32 place before the start of the French Grand Slam.

Another reason why bookmakers think Gauff is going to lose on Saturday is that she’s winless against Swiatek. Sure, they’ve met only twice so far, but Iga beat her relatively easily each time. This goes especially for their clash at the Miami Open in March when Swiatek won 2-0 (6-3, 6-1).

It seems that the real question ahead of the 2022 French Open women’s final isn’t who’s going to win. The question is are we going to see an exciting match or Swiatek is going to run over her opponent in straight sets. Judging by Swiatek’s Vegas odds, the latter scenario seems more likely.