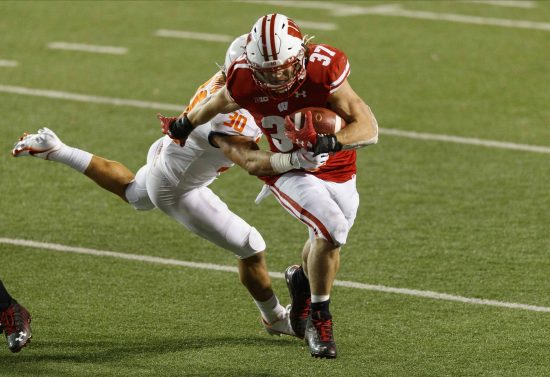 Illinois Fighting Illini and Wisconsin Badgers are two mystery teams. They are both top performers in college football and yet, they are only joining the NCAAF race, which means that the game can go either way.

Yet, ESPN already predicts an overwhelming 93.9% probability win for Wisconsin sending a really strong signal right there. To determine if this is actually the case, we will take a closer look at the available statistic and try to read it to the best of our ability.

Illinois vs Wisconsin Odds to Win

Where and When to Watch Illinois vs Wisconsin

Illinois haven’t had a single competitive game for over a year now, taking a backseat. As you can imagine, the data available for the team is rather scant and anyone relying on such for Friday will have to go a little blind.

While we cannot really judge for the team’s current performance this year, we can take a look at what they did in 2019. Quarterback Brandon Peters clocked in 1,884 passing yards and running back Reggie Corbin added some 675points last season.

These efforts were complemented by wide receiver Josh Imatorbhebhe with 634 receiving yards and lineback Dele Harding with 154 tackles. The team posted decent but slightly low 35.17 third down conversions, which means that they still have some work to do this year.

Whether they make it through will depend on the team’s composition as well as fitness of each individual player. With a mere 6.3% chance to win on Friday, Illinois is definitely a tempting wager.

The Fighting Illini are posted at a massive disadvantage at (+660) making us wonder if they aren’t a worthy choice. Carnation seems to agree with our prediction that Illinois has more than a fighting chance.

Next we have the Wisconsin Badgers, a team that has tradition and the stats to back it up. Last year, the NCAAF franchise wrecked quite a bit of havoc. Jack Coan, the team’s quarterback managed to secure 2,727 passing yards, much better than Peters’ own performance.

Jonathan Taylor, the running back, added some 2,003 rushing yards and wide receiver Quintez Cephus notched up 901 receiving yards. Jack Sanborn, the linebacker, put in only 80 tackles, but that is usually the case when a team has a very strong offense – there are fewer situations where you need to defend.

Of course, individual statistics is one thing. Knowing that the team’s third-down conversions were 48.15 is another. Looking at the results, Wisconsin definitely is a formidable team and this conversion rate merits the (-1000). Most reviews seem to agree with Wisconsin’s superiority.

Perhaps a more reasonable prediction here would be Illinois at +20 (-105).