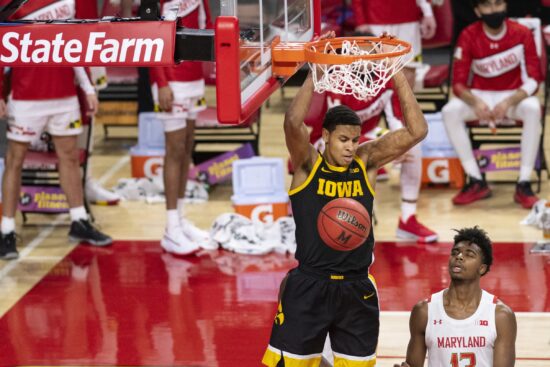 On Thursday evening, #5 Iowa is facing off with unranked Indiana in a game, in which the Hawkeyes are expected to win. The game will be broadcasted live on FOX Sports 1, suggesting that the network believes there’s going to be enough excitement on the court to keep the viewers interested.

The Hawkeyes (11-2) are one of the college basketball teams that haven’t dropped a game in 2021. In fact, their winning streak stretches back to 2020, with their most recent loss happening on Christmas, when they played Minnesota. They lost that game after overtime.

This Thursday, they’re welcoming Indiana, a team that’s had mixed success over the last couple of weeks. The Hoosiers have a total score of 8-6, but four of those losses happened within the last four weeks. The most recent one happened last Thursday when they lost to Purdue 81-69.

The Hawkeyes Want to Keep Winning in 2021

It’s not surprising that Iowa is currently in no.5 in the rankings as this team has been playing very well lately. In fact, the Hawkeyes have been pretty decent this entire season, with only two defeats in 13 games. Both of those losses happened in December, in a one-week period.

Since then, the Hawkeyes have won four straight games. They played against the following teams:

In all of those games, the Hawkeyes were the favorites. The same is the case for the Indiana vs #5 Iowa game.

The last time these two met, the score was 89-77 in favor of Indiana. That game was played in February 2020, when Iowa was ranked #21. Ahead of the Indiana vs #5 Iowa on Thursday, the Hawkeyes are #5.

Another big difference is that last season, the Hoosiers were playing much, much better. In fact, they finished the season with 20-12. Many of the wins they made in 2019-20 were against ranked teams. This season, however, the Hawkeyes are still without a victory against a ranked team.

NCAAB odds suggest that Indiana is going to have a field day on Thursday. Not only are the Hawkeyes a better team than the Hoosiers, but they’re also in much better form. Anything but a comfortable win for Iowa would be a big surprise.