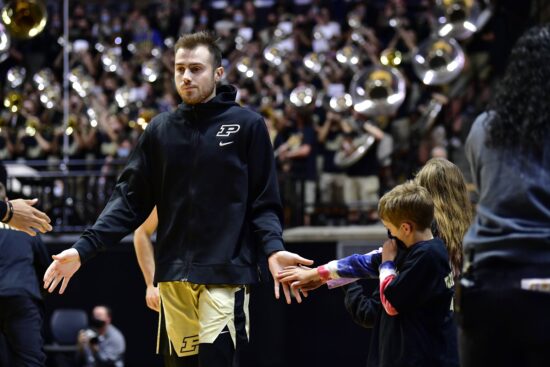 The Purdue Boilermakers have already reached their highest ranking in school history at #2, but that’s likely to be broken when next week’s polls come out as we’re likely looking at the new #1 team in the nation after Duke’s loss last week. That is, if Purdue can get past a pesky Big Ten foe in the Iowa Hawkeyes, who have also started their season 7-0 and have one of the most dynamic scorers in the country. Oddsmakers don’t seem phased though, making the Boilermakers -11.5 favorites.

There aren’t many major conference teams that are undefeated yet still not in the top 25, yet that’s where Iowa (7-0) finds themselves. The reason the Hawkeyes aren’t yet getting any national love is because their early-season schedule has been very soft. They didn’t play in any tournaments, in fact, the first six games of the season were at Carver-Hawkeye Arena, and all as -19.5 or better favorites.

Iowa did succeed in their first challenge of the season, playing their first away game of the year at Virginia on Monday and coming away with a 75-74 win in the Big Ten / ACC Challenge as +2 point underdogs. The old sage Jordan Bohannon had 20 points in that game, and the 6th year Senior point guard will be invaluable on Friday night against an extremely good Purdue squad.

Besides Bohannon, Fran McCaffrey is going to need an elite performance from Keegan Murray if the Hawkeyes are to upset the projected new #1 team in the country. Murray ‘only’ had 18 points against Virginia, his first time scoring less than 20 on the season. That game dropped Murray to #2 in the nation in scoring (24.6) but Iowa was still #1 in points scored (94.0).

Purdue Can Feel It

It’s going to be an exciting atmosphere at Mackey Arena on Friday night mostly because fans can feel the first #1 ranking in school history coming. At the same time, they don’t want to fall into the same trap Duke did last week, losing in their first game atop the polls in an upset at Ohio State.

The thing is, if Purdue beats Iowa and gets to #1, they might stay there awhile because this team is just too deep – and good. The Boilermakers have already beaten then #18 North Carolina (93-84), then #5 Villanova (80-74), and most recently absolutely dismantled Florida State 93-65 in the Big Ten ACC Challenge but to be fair the Seminoles were very shorthanded.

That famous Purdue depth was on display in the Florida State game with Jaden Ivey (18) leading a group of five Boilermaker players that had at least 11 points. Ivey (15.4), Zach Edey (16.9), Sasha Stefanovic (12.9), or Trevion Williams (12.3) could each dominate a team on any given night – but usually, it’s the whole group that contributes as Purdue’s 92.4 ppg are second behind only the Hawkeyes in the entire country.

Purdue is great – but are they that good to be favored by nearly a dozen in a Big Ten matchup against an undefeated team? Sure Iowa has beat up on some slugs early on, but winning breeds confidence and they too know the situation about how the Boilermakers are going to be headed to #1 with a win. Purdue gets to feel what it’s like to play with a bullseye on your back every single night.