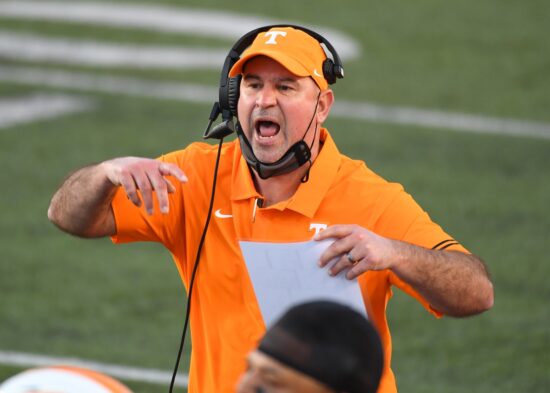 Last night, the Tennessee Volunteers football program of the University of Tennessee announced their decision to fire coach Jeremy Pruitt and nine staff members. After three years on Rocky Top, Pruitt is no longer their coach, the reason being that an internal investigation found evidence of recruiting violations on his part.

The story goes that Pruitt and other staff members broke recruiting violations while trying to sign running back Eric Gray. The same goes for their pursuit of offensive tackle Amarius Mims who ended up signing for Georgia in the end. News about the investigation broke during the Volunteers’ final game of the season when Tennessee played Texas A&M.

Jeremy Pruitt is investigated for recruiting violations not only by the University of Tennessee but also by the NCAA. The university has hired a law firm to help out with the investigation. Considering that Pruitt was fired for cause, the university will not have to pay his buyout clause that’s set to $12,880,000.

Pruitt’s termination will be effective on Tuesday at 5:00 pm, as confirmed by a statement issued by the university.

“Your failures are likely to lead to significant penalties to the university and has jeopardized the eligibility of our student athletes,”

as written in the termination letter to Pruitt.

Jeremy Pruitt is not the only one who lost his job at the University of Tennessee. The same goes for nine other staff members, including assistants Brian Niedermeyer and Shelton Felton. The role of Niedermeyer during Pruitt’s reign was coaching inside linebackers. On top of that, he was also involved in recruitment. When it comes to Felton, his job was the linebackers coach.

Six other staff members received termination letters from Tennessee. Those include four members of the on-campus recruiting team, the director of player personnel, and a football analyst.

Four Months After Getting a $400,000 Raise, Jeremy Pruitt Gets Fired

Even though the Tennessee Volunteers were far from impressive in the 2020 NCAAF season, their coach received a contract extension that was supposed to keep him around until 2025. Not only that, but he also received a $400,000 raise.

To be fair, the university’s decision to extend Pruitt’s contract was based on his team’s performances a year earlier. In 2020, the Volunteers had a score of 3-7. One of those seven defeats was the first loss to Kentucky after 36 years.

However, in 2019, they finished 7-5, which earned them a bowl invitation. They played in the 2020 Gator Bowl, in which they defeated Indiana, which meant Pruitt got his first bowl victory in his career.

Thanks to the Volunteer’s impressive performances in 2019, Pruitt got his contract extension on Thursday, September 24, 2020.