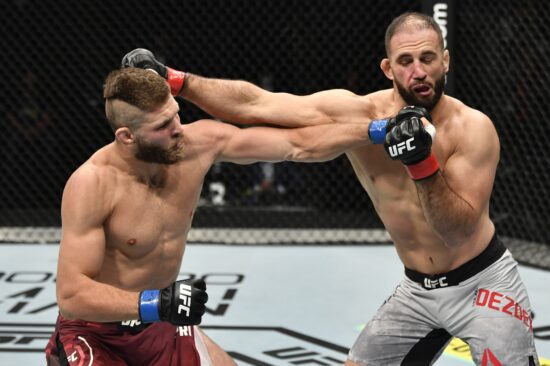 Jiri Prochazka put the spotlights on him following tonight’s KO win against Dominick Reyes. It seems that after just two fights in the UFC, this guy might receive an opportunity to fight for the title.

After just two matches in the UFC, Jiri Prochazka became one of the most known guys. Why? His KOs against Volkan Oezdemir and Dominick Reyes have been devastating, and the Czech managed to become a possible title contender in the shortest possible time.

He would stop the former UFC light heavyweight challenger Dominick Reyes last night after a spinning elbow knockout at 4:29 of the second round. After pressing Reyes back against the fence and a couple of hard punches, Prochazka would hit him with a perfectly aimed left spinning elbow. Reyes fell like a tree, not moving at all for some time.

This was one of the most devastating KOs since 2021 started and something that definitely introduced Prochazka to the UFC community, even though this guy already had a respectful resume behind him.

Previously, the fight saw a lot of action coming from both sides. Even though Reyes couldn’t completely match Prochazka’s pace, he never wanted to back out from the fight but attacked as well, once even hurting the rival, but without significant damage.

On the other side, Prochazka had several combinations and surges that damaged Reyes a lot. The Devastator had his nose bleeding already at the end of the first round, and even though he looked as if he might come back midway through the second, in the end, the American posted his third loss in a row, second via KO.

Prochazka to Fight for the Title?

Prochazka knows what it is like to fight for the belt, as he won the RIZIN title in the past. After these two wins, the media immediately nominated him for the next title challenger here. If this comes true, he will face the better from Blachowicz vs Teixeira, which occurs at UFC 266 in September.

There are many others aiming to have a shot at the belt in the near future. Aleksandar Rakic is one of them, and we just might witness a clash of these two guys in a title-eliminator.

Giga Chikadze (13-2 MMA, 6-0 UFC) solved Cub Swanson (27-12 MMA, 12-8 UFC) with a nasty body kick, earning his sixth consecutive UFC win and keeping his record perfect. The Georgian featherweight imposes himself as one of the best fighters in the division, and he already called out the former champion, Max Holloway.