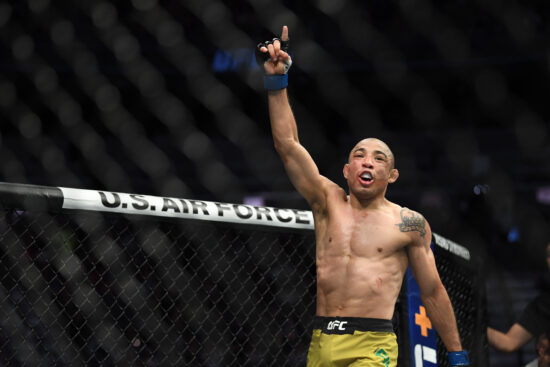 UFC veteran and former featherweight champion Jose Aldo is set to return to the octagon on December 4, 2021.

Aldo, 35, fights out of Nova Uniao – a Brazilian Jiu-Jitsu academy based in Rio de Janeiro.

Best known for his five-year-long reign as featherweight champion from 2010 to 2015, Aldo, who was eventually dethroned by Conor McGregor at UFC 194, will undoubtedly go down in history as one of the sport’s best.

Expected to be introduced into the UFC’s illustrious Hall-of-Fame sometime in the future, long-time fight fans will be hoping the South American pioneer can top a remarkable career with another late title surge.

Having made his UFC debut all the way back in 2011, Aldo’s next fight will be his 19th in the UFC and the 37th of his professional career.

Currently boasting an overall record that includes 30 wins and just seven losses, Aldo is one of the most well-versed and experienced MMA fighters on planet earth.

Aldo’s last fight, which served as UFC 265’s co-main event and took place back in August 2021, was against compatriot and American Top Team member Pedro Munhoz.

After three rounds of action, Aldo saw his hand raised by way of a unanimous decision victory.

Aldo is booked to face rising bantamweight contender and number four ranked Rob Font in the UFC’s next Fight Night.

Should the Brazilian overcome Font during the Main Event of December’s first Fight Night, the 35-year-old’s professional record will improve to 31-7.

Victory next Saturday would not only improve the South American’s record though. Currently ranked inside the division’s top 10 himself, Aldo, who sits at number five, is arguably within touching distance of booking himself a bantamweight title shot.