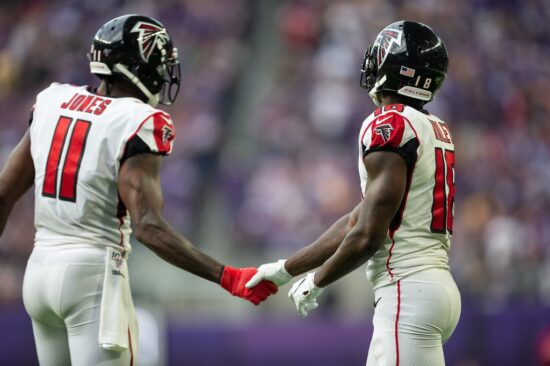 The NFL insiders revealed the news from trustworthy sources that one of the league’s biggest stars might change his uniform in the next 24 to 48 hours.

If everything goes well, we might see Jones becoming a Tennessee Titans’ player until Monday night. Per sources, Titans and the Falcons are negotiating about the deal, and they’ve reached the final stage.

Some of the Titans’ players have already confirmed the deal sharing the news on social networks.

Even though the fantastic WR had one of the worst seasons in his history, advanced stats show that he played extremely well once on the field. With 15.1 yards and 75 percent of successful catches, his efficiency on the field was very good, even though the final output was pretty low.

Jones is the two-time first-team All-Pro, and three-time second-team All-Pro, being a seven-time Pro-Bowler. He was the receiving yards leader twice, and the NFL 2010′ All-Decade team member. The Falcons drafted him back in 2011 as the sixth pick overall, coming from Alabama.

Major Changes in Tennessee and Atlanta

The Titans had to react after losing TE Jonnu Smith and WR Corey Davis who went to New England Patriots and the New York Jets, respectively. They weren’t going to allow losing a momentum built over the past two years, which is why they had to respond and bring a megastar. Jones fits perfectly in their conception, with Titans having the most feared running back in the league, Derrick Henry.

This way, they will have two elite weapons on the field, making it very difficult for the rivals to defend. With a player or two, their chances of winning the Super Bowl would be pretty high.

On the other side, the Falcons are slowly starting with a rebuild. Jones’ departure is a logical move for the franchise from Georgia, which already has propper replacements for him. One is Calvin Ridley and Kyle Pitts, the fourth overall pick at this year’s NFL draft. Pitts was the highest-drafted tight end in history, and one of the biggest prospects in the past several years.

If this deal goes through, and it seems that it will, the analysts expect to see an avalanche of other trades following it. Jones’s move to AFC South would shift the balance of power within the league, and we usually see strong reactions after one such change.