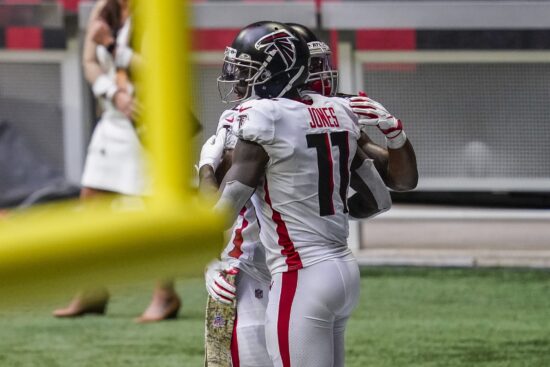 “I’m out of there” – Julio Jones said this on live TV after being asked about his future with the Atalanta Falcons.

Immediately after, a number of online sportsbooks released Julio Jones next club odds, adding more fuel into the trade conversation.

It was interesting that there wasn’t an obvious early favourite, because it did suggest that nobody was close to an agreement and nobody really knew how this was going to play out.

Julio Jones to Reconcile With Atlanta?

July 28, 2011 – this is the date when Julio Jones signed his first contract with the Atlanta Falcons. He signed the deal three months after the Falcons chose him as their first pick of the 2011 NFL Draft.

Over the next decade, Jones became one of Atlanta’s crucial players, setting all sorts of records along the way. Some that stand out include:

On top of that, Jones is also the second-highest-paid wide receiver in the NFL, just behind Arizona’s DeAndre Hopkins. So, why does he want to move on?

Apparently, he’s not too satisfied with Atlanta’s new management. The story goes that they’ve informed other teams that they’re ready to listen to offers for any of their players, suggesting that they don’t regard Jones as indispensable.

Apart from having a beef with the team management, Jones probably has another reason to think about a trade – trophies.

The last time the Falcons won the division was in 2016. The same season, they got defeated by the Patriots in Super Bowl LV. The last time they played in the postseason was in January 2018.

Still, their most disappointing season in recent years was the last one, when they finished at the very bottom of the National Football Conference.

49ers and Colts Among Top Favorites for Jones’ Signature

The San Francisco 49ers and Indianapolis Colts have many things in common, starting with the fact that both teams can’t be too proud of their 2020-21 achievements.

The 49ers failed to qualify for the playoffs; the Colts got knocked out in the first round.

Another similarity is that both teams have fantastic QBs. The San Francisco franchise has Jimmy Garoppolo and Trey Lance on the roster, while Carson Wentz is the supreme ruler of the quarterback position in Indianapolis.

With the QB position sorted out, these teams seem to only need another superstar in the offence to do great the next season. And Julio Jones seems like the man for the job!

Of course, they’re not the only ones who would gladly welcome NFL’s arguably best receiver. The Titans, Chargers, Ravens, Patriots, Packers, and many other teams are probably thinking of ways to get Jones to sign.

Last weekend, Julio Jones was spotted in Dallas, sporting a Cowboys jersey. Does this mean they’re his favorite team? Not necessarily, but they could become!

At the moment, the Cowboys aren’t among the favorites when Julio Jones next club odds are concerned. The main reason is that Jones has dismissed the rumors, saying he “ain’t going to Dallas.”

Still, this team would definitely benefit by signing him, even though such a scenario seems very unlikely at the moment. Even the oddsmakers agree, giving +1200 on him moving to Dallas.

At least, that’s when the 2021 NFL season is concerned, but who knows what the future holds. As a reminder, Jones still has three years left on his Falcons’ contract, which is more than lucrative.

For this reason, he might decide to put the dream of moving on for at least another season.

A Dramatic Shift in Favour of the Patriots

It really must be stressed that betting markets are easily spooked and a simple run of bets can instantly make somebody the favorite, but a shift like this simply can’t be ignored:

These rumours about the Patriots haven’t come from nowhere – there are reports that he’s interested in linking up with Cam Newton, while several players have been on social media hinting that he could join.

It would complete the most un Bill Belichick-like offseason of all time but the team needed a major reset, and it would be naive to think that the return of Tom Brady in week 4 won’t play a part in this massive rebuilding effort either.

A 1st round pick might be a little too much but it’s easy to see a 2nd rounder being given up alongside an exchange of late round picks, while Sony Michel and N’Keal Harry could also come into this too.

It would be a massive move for the Pats to make but they do have plenty of cap room and the need, while it would set everything up for Mac Jones to come in and have a memorable rookie year.