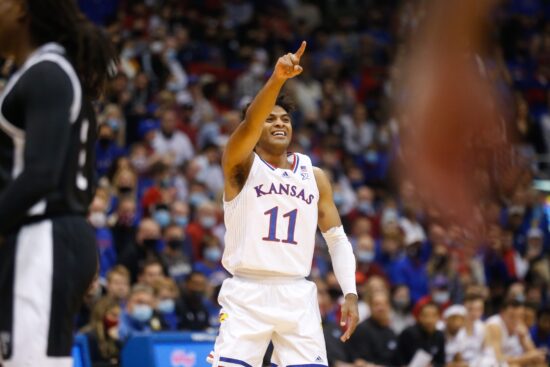 The college basketball season tips off on Tuesday, November 9th, and by far the most anticipated game on opening night is the #3 Kansas Jayhawks squaring off against the Michigan State Spartans in the Champions Classic at Madison Square Garden. KU is just a -4.5 favorite in this matchup, a number that seems low when you consider the amount of talent the Jayhawks have on the team this season and the fact that MSU might experience some growing pains early in the season.

Jayhawks Seem to Have the Team

They have high hopes for the basketball team each and every year in Lawrence, so back-to-back exits in the second round of the NCAA tournament starts to get people a little antsy (no tournament in 2020). It’s the same situation heading into the 2021/22 season and anything less than a Final Four looks like a disappointing year for Bill Self’s squad – even just making the Final Four may be a disappointment.

KU was 21-9 last year, not a bad mark considering how they were looking at a #1 seed in the tournament in 2020 (28-3) before COVID shut everything down. 2021 was a bridge year, and now Kansas looks to get back on track as they are 15:1 odds to win the National Championship next Spring.

Self loses Marcus Garret’s 10.2 ppg from last season but that’s about it. Ochai Ogbaji (13.7 ppg), David McCormack (13.4 ppg), and Jalen Wilson (12.2 ppg) are all back for the 2021/22 season. Not only that, Kansas has added Arizona State transfer Remy Martin who has averaged over 19 ppg the past two seasons with the Sun Devils as well as Joseph Yesufu who put up a dozen points/game at Drake last season.

Michigan State Ready for the Upset?

The Spartans did make the tournament for the 23rd straight year last season, but their 15-13 record was disappointing for a Tom Izzo-led squad. Michigan State was eliminated in the First Four last postseason and comes into this season unranked, but at #22 in the KenPom rankings.

Michigan State will have to replace 15.5 ppg from Aaron Henry coming into this season as he’s off to the Philadelphia 76ers. Josh Langford (9.8 ppg) is also a 4-year player that used up his eligibility so Izzo is going to need to turn somewhere else for leadership and experience. Joey Hauser (9.9 ppg) and Gabe Brown (7.4 ppg) come into their Senior seasons looking to fill that void. Rocket Watts also transferred to Mississippi State.

MSU’s biggest addition for the upcoming season is PG Tyson Walker, who put up 18.8 ppg at Northeastern last season. Walker will take over the starting PG duties against Kansas, so we’ll see right away how comfortable he is running the Spartans offense. Max Christie also comes in as a 5-star recruit to begin his freshman season in East Lansing.

Kansas has high expectations for the season and they are the much deeper team in this game. The Spartans have to break in a new PG in a tough situation at Madison Square Garden, and they’re relying on Christie to be one of their top scorers this season but he’s playing on the biggest stage in his first collegiate game. The Jayhawks just seem built for a big win to open the season.