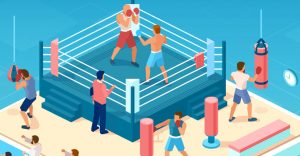 One of the best female boxers of all-time will be back in action this weekend, as Katie Taylor looks to improve her excellent record in the ring against Miriam Gutierrez. But, will this be a simple bout to call for boxing bettors?

There aren’t many female boxers in the history of boxing that have redefined the sport as much as Katie Taylor, and it can be argued that her legacy is secure regardless of what happens between now and the end of her career. Taylor’s boxing career began with an esteemed amateur career, where she won multiple gold medals at the World and European Championships. The crowning moment of her amateur career at the 2012 Olympics where she won the gold medal in London.

She made her eagerly awaited professional debut in November 2016, and she didn’t disappoint as she won by TKO against Karina Kopinska. Since then, she has beaten all 15 other opponents that she has come up against. Her biggest test to date came in the form of fights against Belgium fighter Delfine Persoon. She won their initial meeting at Madison Square Garden by majority decision, before beating Persoon once more in her most recent fight back in August.

The speed of her punches is something that all opponents struggle to contend with, as it enables her to dictate the pace of the bout. Taylor has won ten of her 16 professional fights by decision.

Taylor’s opponent this weekend will be Spaniard Miriam Gutierrez. Like Taylor, she has a perfect record having won all 13 of her professional fights. She started her professional career with a unanimous decision victory against Vanesa Caballero. However, she has proven throughout her career that she has the punching power to knock out her opponents, as she has won by this method on five occasions.

Gutierrez has continued to improve in her most recent fights, as she has beaten Bianka Nagy, Bianka Maijlath and Keren Batiz. In the latter of those fights she won the WBA interim lightweight title, but this will be her chance this weekend to win the real thing. However, this will be a huge step up in opponent for the Spaniard, as Taylor is on another level to the fighters that she has stepped in the ring with previously.

Taylor’s reputation in the ring has been followed up every single time that she has stepped inside the ropes, and this could be another example of the talent that she possesses. She will be wary of the talent that Gutierrez has, but it is extremely difficult to look past the favourite winning this fight at Wembley Arena on Saturday evening.