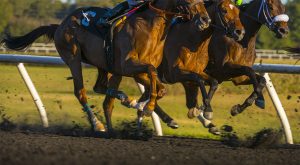 The Kentucky Derby is just around the corner with Churchill Downs (CDI) hosting the greatest horse racing derby in the United States on September 5. After it had to be deferred to September, the event is finally back and the Run for the Roses will bring together some of the best jockeys and horses in the sport.

Yet, there will be no crowds in attendance this year to comply with heightened health and safety protocols. The event was supposed to run with some 23,000 people in attendance, but CDI has ruled against the idea, arguing it would be too much risk and unfair to the guests.

And so, we are looking at some of the horses who are making a strong claim for the title. Tiz the Law may not have been an immediate favorite at first, but Charlatan, Nadal and Maxfield all suffered various injuries making it hard for them to compete.

However, we are looking at some very strong new contenders, including Art Collector and Authentic. Let’s have a look at the odds for the 2020 Kentucky Derby first.

There is a lot of value in the first five horses in the derby. The Run for the Roses will see Tiz the Law retain its leadership position with a solid (-150) according to sportsbooks. Of course, a lot could happen in the next five days with horses falling sick just before the start or getting an injury during training.

That is why even underdogs can quickly rank up in the leadership positions. However, having your eyes on the top five horses and place multiple selections involving those horses are usually the smartest way to go. Art Collector is valued at (+800) and you have Honor A.P. at (+550).

Swiss Skydiver is priced at mere (+1600) but it still makes a valuable pick. Naturally, Authentic (+1000) tends to be a little safer and the horse has already participated in the Triple Crown, posting decent overall performance. Yet, a lot would need to go these contenders’ way to secure a win.

Tiz The Law: Why Is He First?

There are two factors that determine Tiz the Law’s great odds. First, the horse already won the Triple Crown once and it may yet repeat this feat. True, the calendar is all over the place and the Belmont was held in June whereas the Kentucky Derby is now coming up in September followed by Preakness in October.

What Does Jody Demling Thinks?

Jody Demling is not a name you need to introduce to horse racers. A dedicated CBS Sports analyst, Jody Demling has been right in six straight races and he is definitely worth listening to for the upcoming 2020 Kentucky Derby. He also tried to predict the virtual Kentucky Derby right, and he did.

Demling got right all of the following: the Saudi Cup, Gotham Stakes, Rebel Stakes, Louisiana Derby, Florida Derby and Belmont Stakes. He has been so kind as to release his 2020 picks as well and well ahead of the race!

Not surprisingly, Demling is backing Tiz the Law for (4-5) with Art Collector second for (9-2) and Honor A.P. for (7-1). Most sportsbooks picks seem to reflect Demling’s own expectations from the race.