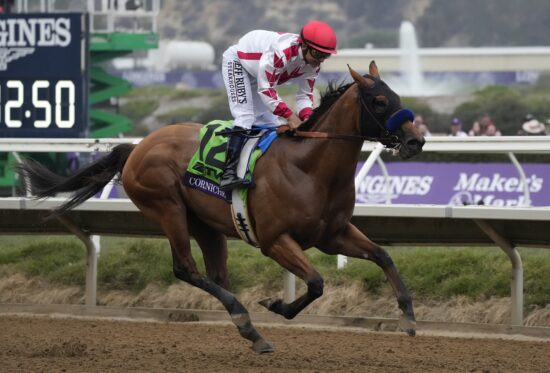 With the Breeders’ Cup action over for another 12 months, the sights quickly turn to the first Triple Crown race of 2022, as the Kentucky Derby betting markets have officially opened. Corniche is the current +700 favorite with BetOnline.ag despite being ineligible at present.

There was a stunning performance in the Breeders’ Cup Juvenile on Friday last week, as Corniche earned a Beyer Speed Figure of 91 when dominating the field. The two-year-old eventually stretched out to win by a length and three-quarters, which has immediately seen him move to the top of the betting for the Kentucky Derby. However, there is immediately going to be a big decision for Speedway Stable LLC to make, as Bob Baffert is currently banned from entering any horses into the Kentucky Derby until 2023.

The American trainer refused to get drawn into discussions of a Derby bid for Corniche, stating that a decision will be made further down the line. However, a decision will need to be made very soon, as the two-year-old currently isn’t able to win points on the Road to the Kentucky Derby, which would book his spot in the featured race of the Triple Crown season. Baffert was handed a ban at Churchill Downs following the two failed samples from Medina Spirit after winning the race in 2021.

The confusion centering around Corniche means that value can be found elsewhere in the market. Pappacap ran a career-best run in the Juvenile but just lacked the final speed to close down the leader. However, Mark Casse was delighted with his attempt and teased that the two-year-old could take the Fair Grounds trail to the Derby. That could see an early return to the track in January for the Pappacap in the Lecomte Stakes. It won’t be the first time that Casse has taken that route, as both War of Will and Enforceable took the same path before the Triple Crown race.

Commandperformance and Pinehurst were both expected to challenge in the Juvenile too. Commandperformance will certainly be more comfortable back away from Del Mar but did run a decent race to finish fourth. Pinehurst is another issue, as he is another of the two-year-olds trained by Baffert, which means connections will have a decision to make.

The best value in the market is currently Jack Christopher. The two-year-old was the favorite for the Juvenile before pulling out at the eleventh hour with a slight injury. His record is still incredibly strong, and gamblers will not be getting anything near the +1600 mark if he returns to the track with a victory next time out.