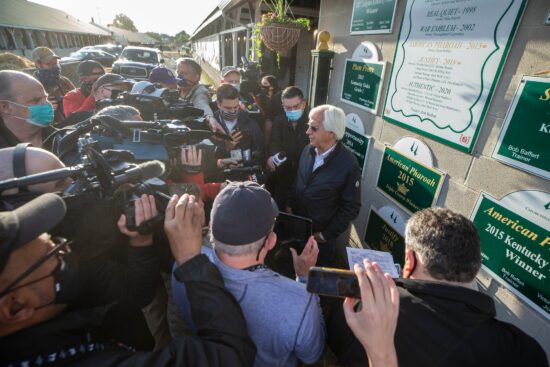 Medina Spirit was the surprising winner of the Kentucky Derby on May 1, but that victory is now in jeopardy after a failed post-race drug test. This decision will be appealed, and it could take months before a final winner is declared.

Legendary trainer Bob Baffert broke the news of the failed drug test during a press conference on the grounds at Churchill Downs. Baffert has since been suspended from entering any horses in races at the historic track until this issue is resolved.

Baffert maintained his innocence when addressing a pool of reports on Sunday morning and claims that the win by Medina Spirit was done fairly. The failed test was a result of Medina Spirit having 21 picograms of betamethasone in his system as he was tested after the Kentucky Derby title.

Betamethasone is a form of steroid that is used in horses, and this can be given in small amounts. The 21 picograms was more than double the legal amount, but Baffert claims that Medina Spirit has never been given this drug.

Mandaloun finished in second place at the Kentucky Derby by just half a length, and that horse could be declared the winner if this positive test holds up. Mandaloun is not expected to race at the Preakness Stakes on Saturday, but Medina Spirit will be in the running.

Dancer’s Image was disqualified from the Kentucky Derby after winning the event in 1968, but that is the only other time in history that a champion has been stripped of the title. Medina Spirit can still compete for the Triple Crown until a decision is made on the Kentucky Derby.

Baffert No Stranger to Failed Tests

Bob Baffert has dealt with plenty of failed drug tests in his career, but he also has a proven track record of defeating these decisions on appeal. Baffert is expected to challenge this ruling with hair, blood, and DNA samples, and he is convinced that Medina Spirit will be cleared of all wrongdoing.

Attorney Craig Robertson flanked Baffert as he spoke on Sunday morning, and he will work with the trainer to clear the name of Medina Spirit. Baffert also wants to clear his own name as not being able to enter horses at Churchill Downs will be a significant blow to his career and his legacy.

This is the fifth horse that is trained by Baffert to have failed a drug test in the past 12 months. Gamine, another horse trained by Baffert, was disqualified from the Kentucky Oaks in September after the same drug was found.

There is a chance that the Preakness Stakes could ban Medina Spirit from entering the race, but that decision is not expected until later in the week. Baffert has offered to have his horse tested prior to the race to prove that there are no illegal substances or steroids being used.

Baffert recently won an appeal with the Arkansas Racing Commission, and he is confident that the same result will occur with the Kentucky Derby champion.