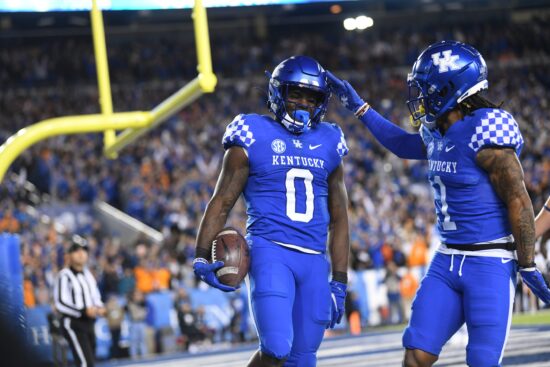 The Kentucky Wildcats have fallen from #18 to out of the top 25 after a 45-42 loss to Tennessee last week. It was the third straight defeat for UK, one of which “doesn’t count” as it came against #1 Georgia. The good news is that the Wildcats have a great chance to get back on track this week against the 2-7 Vanderbilt Commodores. Oddsmakers have the Wildcats as -21.5 favorites on Saturday night.

A 17-31 loss at Mississippi State and losing 45-42 last week at home to Tennessee, but Kentucky has a great chance of putting together a three-game win streak to close the season at 9-3 which would put them in position for a pretty good bowl game. Aside from playing 2-7 Vanderbilt on Saturday, UK has two non-conference games left against New Mexico State and at Louisville, two contests in which they should be favored.

Kentucky fans were glad to see their offense get back on track last week even if it did culminate in a 45-42 loss to Tennessee. QB Will Levis had 372 yards and 3 TD, his best game of the season. Christopher Rodriguez, Jr. also added 109 yards on the ground – trends which should continue as Vanderbilt allows the 2nd most yards in the SEC at 462.7 yards/game.

Vanderbilt has had another down year, then again their 2-7 record could be considered successful following an 0-9 campaign a year ago. It’s going to be tough to get a win on Saturday night as +21.5 underdogs, but this is still Vandy’s best chance at a W being at home and having to go on the road to Mississippi and Tennessee the last two weeks of the season.

Vandy has been close to getting their 3rd victory of the season a couple of times over the past month. The Commodores fell 21-20 at South Carolina in week 7 as +19 point underdogs and hung with Missouri in a 37-28 loss in week 9. That October 30th loss to the Tigers was Vanderbilt’s last game, meaning they’ve had an extra week off to prepare for their last home game of the season against Kentucky.

The 28 points Vanderbilt put up in the loss to Missouri was their 2nd most of the season following a 30-28 win over Connecticut in week 5. The running game was huge for the Commodores as QB Mike Wright ran for 152 yards on 14 carries in addition to his 122 yards and 3 TDs through the air. Patrick Smith also added 95 yards and a TD on 17 carries but things get tougher this week as Kentucky has the 4th best rush defense in the SEC.

This isn’t said very often – but there’s a lot to like about Vanderbilt this week. The Commodores are coming off a bye week, and they’ve played opponents relatively close in two of the last three games. Vanderbilt also played Kentucky close last season, losing just 38-35 in Lexington as +17 point underdogs.

Of course, none of this means Vanderbilt will actually pull off the outright upset over the Wildcats, but it does prove that the three TD spread looks like it’s too much.