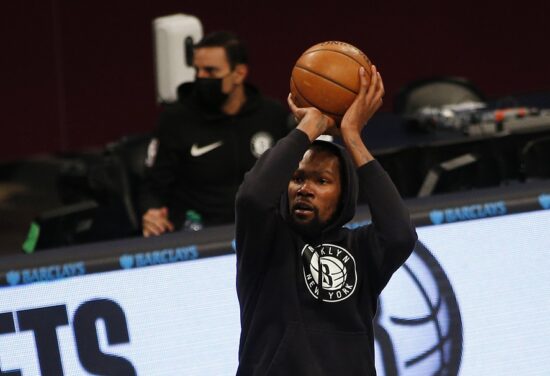 We saw an earthquake last night, as Kevin Durant officially requested a trade from the Nets’ owner, Joe Tsai. The Nets and Durant’s manager are working on a trade solution, and for the moment, half of the NBA is looking for the four-time NBA scoring champion.

The Suns are by far the top favorites to acquire Durant. According to the sources from within the organization, Phoenix is the No.1 desirable destination for the player, who is trying to force his way to Arizona. However, the same sources stated that the Nets won’t be doing any favors to Durant and want to secure their benefit from the deal first.

The Suns were topping the league in the previous two regular campaigns, reaching the NBA Finals in 2021. They have one of the best teams in the league, with Chris Paul and Devin Booker in charge.

Miami Heat are also in the mix and the second favorable destination for Durant. At the start of the night, they were +200 to land the former NBA MVP, but they fell to +900 right now, behind the Nets, who are +700 to keep KD and the Philadelphia 76ers at +800.

The Heat have a lot of trade assets and are in a much better situation in that aspect than all the other teams. They were atop the Eastern Conference during the regular season this year, reaching the East finals in the playoffs and losing to the Celtics in seven games.

According to all the relevant analysts, three of the most realistic options are trades to either Phoenix and Miami or Durant’s stay in Brooklyn.

What the Hell Happened in Brooklyn?

The situation with the Nets exploded in the past two days. At first, Kyrie tried to find a sign-and-trade option to get out of the Nets, but after finding out that there weren’t any suitable offers, he would opt in to the final year of his contract. Though, Kyrie sparked some turbulences inside the organization.

We still don’t know whether this happened because of Uncle Drew’s actions or something else, but many see the point guard as the reason for Durant’s decision.

KD isn’t willing to lose more time, as he desperately wants to win another championship ring, and for the moment, he won’t be able to do that with Irving and his constant problem-seeking behavior. James Harden already fled away from the team last year, after a short stint, and for the moment, Ben Simmons isn’t very interested in playing, as he appeared only once on the court since landing at the Barclays Center.

The next few days should give us the answer on Durant’s future, which could be one of the most impactful news in the last few years.