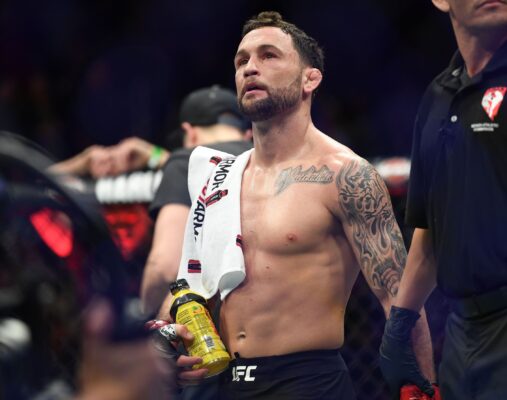 UFC lightweight champion Khabib Nurmagomedov has issued a shocking plea to the loved ones of bantamweight legend Frankie Edgar.

When the game gets ahead of you, you should just stop.

Nurmagomedov, 32, has recently spoken about the devastating knockout Edgar suffered against Cory Sandhagen during a recent Fight Night.

Sandhagen, 28, shocked the MMA world after an absolutely savage flying-knee in the fight’s first-round knocked Edgar clean out.

The pin-point but truly brutal knockout was celebrated among the sport’s fans, but instant concerns were raised as Edgar’s body lay motionless on the octagon’s canvas.

Sandhagen’s vicious flying-knee was so devastating that Edgar revealed after the event how it caused him to suffer severe memory loss.

“‘Since when was I supposed to fight him?’ I thought maybe I just took this fight on short notice or something. He’s like, ‘Bro, two months. You have been training for this guy for two months.'”

In light of the veteran’s recent baron run, which includes three losses in his last four fights, Edgar, who debuted all the way back in 2007, has been urged to consider retirement.

The latest star to weigh in on what is widely regarded to already be a top contender for ‘knockout of the year’ is lightweight champion Nurmagomedov.

Speaking at a recent media event (translated by RT), the Dagestan pound-for-pound great said: “I know Frankie, I know his kids, his family. Of course, I feel for him. Sometimes I just put myself in his place, to get knocked out like this, especially when your kids can see it. And his kids are 7-8 years old, do wrestling themselves. They even compete already. That’s tough.

“I wouldn’t like to see my friends get knocked out like that. It’s not right to compete at that weight class at his age. There must be some close ones around to tell him it’s enough. Yes, we all want to earn money, but there are some more ways to do it.”

“Your age doesn’t care about your name.

“When the game gets ahead of you, you should just stop.”