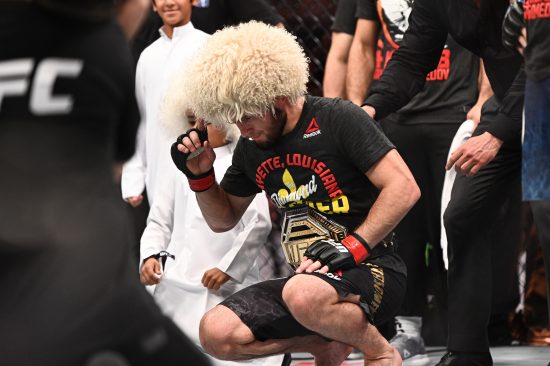 Khabib Nurmagomedov consolidated his supremacy in the UFC, defeating Justin Gaethje at the Flash Forum on Fight Island in Abu Dhabi in the United Arab Emirates. With his triangle- choke submission in the second round Nurmagomedov has become not only the UFC lightweight champion, but also the sixth fighter with a 13-fight UFC win streak.

His achievement puts him alongside other legendary fighters as Silva, Jones, Johnson, Holloway, and St-Pierre.

Khabib started the fight with an explosive salvo of knees and jabs forcing Gaethje to seek quick recovery and power shots in his opponent’s face. It was in the first round where Khabib’s strategy became apparent, with the would-be champion close to locking Gaethje in a dangerous submission grip moments before the first round was out.

Instead, Gaethje managed to avoid both Khabib’s hooks and land a few punches of his own that grazed Nurmagomedov but didn’t kill his momentum. It was that momentum that really took over in the second round, with Khabib eventually climbing the cage and landing in a tight triangle choke.

The choke quickly put Gaethje under who blipped out of consciousness for a moment, but quickly sprung back on his feet – just on time to lie next to Khabib who was paying a quick homage to an all-high power for helping him through.

The moment when Gaethje lied next to Khabib and paid his compliments was what sets great UFC fighters from the petty squabbles of aspirants who fall short.

So, what’s next for Khabib? He has announced his retirement, after promising his mother that the lightweight champion will be his last bout, and right in the wake of his father passing away to COVID-19 in July.

The title has been transferred automatically to Justin Gaethje as a result.