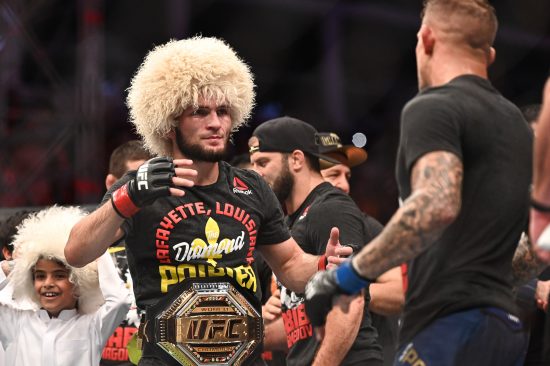 In May, Justin Gaethje beat Tony Ferguson to become the interim champ despite going into the octagon as an underdog at +187 odds. Against Khabib Nurmagomedov, he’s an even bigger underdog, but can he upset the odds one more time? We will find out the answer on Saturday afternoon when the Khabib vs Gaethje unification bout is taking place.

The Road to the Fight

It’s safe to say that only a year ago, no one thought Khabib vs Gaethje was going to be arguably the biggest event in the UFC in 2020. Khabib was supposed to defend his title at UFC 249, but due to the COVID-19 travel restrictions, his bout with Tony Ferguson was canceled. Instead, Justin Gaethje stepped in as his replacement.

Odds were heavily favoring El Cucuy ahead of the Ferguson vs Gaethje clash on May 9. However, a big upset happened when Gaethje’s punches made the judge declare a TKO victory for the American, thus making him the interim champion.

The moment it happened, the entire MMA world started thinking about the superfight between Gaethje and Khabib. Five months later, the unification is actually happening.

Khabib vs Gaethje Tale of the Tape

In the Name of the Father

The undefeated MMA legend comes from a fighting family, with another UFC fighter Abubakar Nurmagomedov being his cousin. Khabib made his first step in the world of combat sports when he was only a toddler, thanks to his father Abdulmanap.

Khabib’s dad was the one who introduced him to wrestling in the rural area of Dagestan in Russia where bears are thought of as a sort of domestic animal.

From wrestling bears, Khabib moved to Sambo, the sport in which his father was an established coach. In 2008, Khabib made his transition to MMA, but Abdulmanap remained his coach. He stayed a part of his son’s coaching team until the end of his life – on July 3, 2020, Khabib’s father died as the result of complications caused by the COVID-19.

In the following weeks after Abdulmanap’s death, rumors about Khabib retiring started emerging. However, they were debunked when his team announced the Eagle will take part in the UFC 254. Not only does he have no intention of retiring, but unifying the Lightweight titles would be a proper homage to his father.

Khabib has probably never been this motivated to win a fight, which is one of the reasons why UFC sportsbooks are giving him the role of the favorite. With -305 odds, he’s expected to win the fight comfortably. However, the same as the case with Tony Ferguson back in May.

In a recent interview, Gaethje seemed very confident in his ability to shock the MMA world once again. According to the interim champion, titles are not his only motivation. He’d also like to ruin the party for everyone rooting against him.

Sure, he did something similar already this year, but everyone needs to keep in mind that Ferguson did not have too much time to prepare for that fight. In fact, his mind was set on Khabib until only a few weeks before the event.

This time, it’s different – Khabib has had months to prepare himself for the fight, both physically and emotionally.