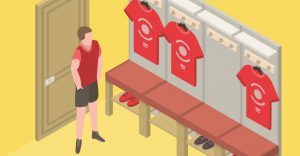 The Brooklyn Nets say that any story about Kyrie Irving and being a negative presence in the locker room since joining the team is completely untrue.

Nets Say Kyrie Has Not Been a Distraction

A story came out concerning Kyrie Irving being a negative influence. It was not a story from his time in Boston. Apparently it comes from the team’s trip to China where according to a story by a Boston reporter, there was an incident with Kyrie that left the team scratching their heads. Anyone who is thinking “here we go again with this guy!” has every right to feel that way.

He essentially left the Celtics after being called a negative influence on that locker room. His issues there were well documented but that was a different situation. He was traded to Boston whereas he chose Brooklyn. He really shouldn’t have any issues here. According to the Nets, there has been no Kyrie problem.

Kyrie Irving is One of the Best Players in the League

This is a guy that is far too talented of a player to be involved with anything like this. The truth is we have no idea if something did or didn’t happen on the China trip. If the Nets say it didn’t, then we have to take their word for it unless someone produces evidence to the contrary.

Reporters spoke to Deandre Jordan who said that he hasn’t seen any issues with Kyrie Irving. It has to be noted that Jordan is also Kyrie’s friend so his opinion may or may not be objective. That being said, coach Kenny Atkinson doubled down that any story about Kyrie being a distraction are completely untrue.

While last season would be considered a disappointment, Kyrie Irving still finished 2nd Team All NBA in a down year. He is one of the best players in the NBA and hopefully his time in Brooklyn does not resemble his Celtics tenure.

The one reason for optimism is that at the end of the day Kyrie Irving isn’t the Nets best player. The best player on the team is injured and will be back for the start of next season. When Irving chose to join the Nets, he did so with the knowledge that it would not be his team. He chose to go to the Nets because he knows Durant very well due to their friendship.

If they are indeed as close as they tell everyone they are, the conversation of how the on court relationship would work has clearly already been discussed. The point of all of this is Irving is in a situation that he chose. He’s also in a great position this year with a team that is his for an entire season. It’s what he’s always wanted and he gets a full year to have a do-over. If he can lead this Brooklyn team on a deep playoff run, he will have done something to fix that part of his reputation that has people now saying that he is incapable of leading his own team.