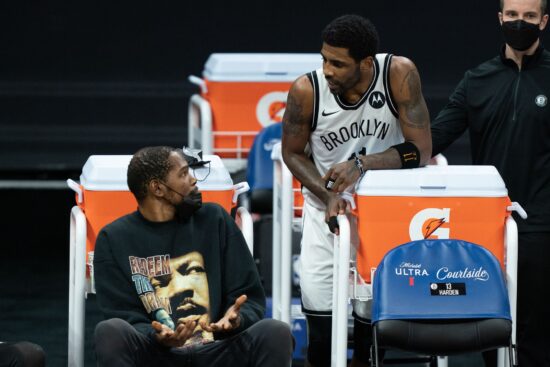 The LA Lakers were the top favorites for getting Kyrie Irving after the news broke out that the fantastic point guard wants to leave the Brooklyn Nets. It appears that he specifically targets Los Angeles as his next destination.

The purple and gold have been top contenders for Kyrie’s signature all along, and their odds, in the beginning, were +100, and at the moment, they reached -130. What will probably cause them to go shorter, even more, is that allegedly Irving bought a house in LA. Nobody confirmed this news, yet on the other side, there weren’t any denials made by the player on anyone close to him, which left opened possibilities for speculations.

Now, this means that he either wants to reunite with LBJ or that he wants to land among the Clippers, which would be a sensation having in mind that they got John Wall a few days ago. Either way, Kyrie’s plans are connected to Los Angeles.

He and LeBron brought the title to Cleveland, beating the Warriors back in 2016, after coming back from a 1-3 deficit and winning Game 7 in San Francisco. We’ve seen Bron trying to recruit Irving for the last few years, but this reunion never happened.

After experiencing failure in title quests with the Nets, Kyrie decided to leave. Irving will be owed $36.9 million in the 2022/23 campaign, and the Lakers are willing to take that expense and even the luxury tax, if necessary.

The interesting thing now will be to see how the Nets and the franchise from the West Coast execute a trade deal because the Nets want to maximize profits in this transaction, and they already stated that there wouldn’t be any friendly concessions.

According to some of the league’s insiders, the Lakers also want Seth Curry in the bargain, but that will cost them dearly. For some, it wouldn’t be odd to see Brooklyn asking for Anthony Davis in return for sending the two to LA.

Nets Still Have Chances, Bookies See Mavs in the Picture

Brooklyn is the second on the list, +425 for Kyrie’s next season team. Some believe that the management and the point guard could find a solution for the future and put an end to all the disagreements.

The bookmakers put the Dallas Mavericks among the top favorites for Kyrie’s next team, +550. Jalen Brunson took off for New York, and the Mavs need not only a point guard but another superstar to add more respect to their name and a second attacking option besides Luka.

However, we don’t think this experiment would have a happy ending because both players like having the ball in their hands and aren’t too keen on being the second option in attack.