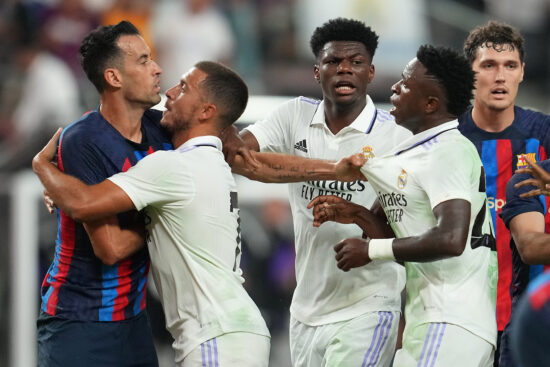 If you’re looking for the latest La Liga title odds ahead of the new 2022-23 season, you’ve come to the right place. That’s right! – La Liga is back!

Catalonian giants Barcelona, after a year of turbulent and painful experiences, are also back. Xavi’s side has made multiple big-name signings already this summer, including former Bayern Munich star striker Robert Lewandowski.

Can the team and their new additions make an instant impact and win the club their 27th La Liga title?

Blaugrana landed big-time players during the summer transfer window, and they are determined to take over Spain after a few years of pause. Their last title came way back in 2019, and after that, the five-time European champions fell into a crisis.

Alongside Lewandowski, Raphinha, Franck Kessie, and Andreas Christensen all joined earlier this summer.

On the other side, Real didn’t change its team too much. And why would they do that after winning La Liga and the Champions League? Aurelien Tchouameni and Antonio Rudiger are the only big-time signings, but the already present core guarantees quality.

Atletico Madrid Stalking from the Dark

As usual, Diego Simeone and Atletico are outside all the talks, all by themselves, forgotten by the media. And the Madridians like that. Two years ago, nobody saw them in the title contention. That was the case in 2014, and they hope for history to repeat itself once more. The third time’s the charm, right?

Atleti changed its team throughout the past few years, bringing in many young players who succeeded the unit Simeone formed upon his arrival to Wanda Metropolitan, Vicente Calderon. His current roster will hit its peak in the next two or three years, and we might expect to see Atletico attacking the title again.

For a long time, the team from Roman Sanchez Pizjuan stadium has been in sort of limbo, levitating between the top three teams and the rest of the league. It seemed they have too good of a team for others but aren’t anywhere near Barca, Real, and Atletico.

They finished fourth in the past three years, but during some stretches, Rojoblancos showed top-level quality and looked like a team capable of challenging the top trio.

This year will be the ultimate test for Julen Lopetegui’s unit. Either they evolve, or they fall apart.