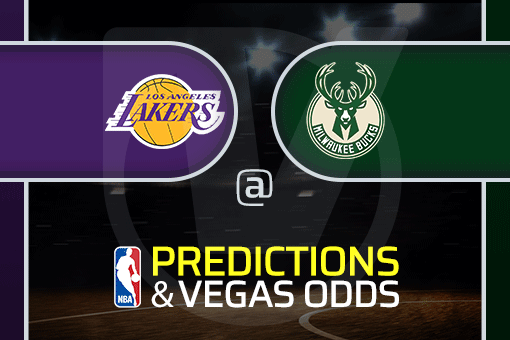 The game of the night takes us to the Fiserv Forum, where the NBA champions, the Milwaukee Bucks, host the LA Lakers. Both teams aren’t that shinny in the last few events, and a victory here is a must.

The purple and gold are without LeBron, but that can’t justify the fact that this team underachieves. They have two of the top 15 players in the league, one of them the former NBA MVP, yet they posted pretty strange results at home. When looking at the last five events, all were in LA, and the Lakers posted a 3-2 record.

They would beat the Hornets, Heat, and the Spurs but lose to the Minnesota Timberwolves and the Bulls in the last game. That one ended 121-103 for the guests from Windy City, who were up right from the start until the end.

The Lakers allowed 55.1% of shooting from the field while hitting 45.6% of their shots. The problems for the hosts were threes, as they hit only six in 32 attempts. The Bulls also outscored the hosts from the paint, even though they didn’t have Vucevic. AD had 20 points, Westbrook 25, while Talen Horton-Tucker ended the night with 28.

Middleton Should be Back

Giannis is arguably the best player in the league, but the Bucks are winning games because of Khris Middleton, who is an X-factor in each contest. The small forward missed eight games and is expected to come back in the lineup tonight, according to the latest intel coming from the league insiders.

The NBA champions are back home following a road trip through the East that saw them meeting the very best teams in the conference at the moment. They are coming off back-to-back losses, one in Boston following an OT and the other in Atlanta against the Hawks, 120-100.

Milwaukee had only 30 boards, which is something we haven’t seen in a while, while on the other side, the Hawks posted 51. Giannis scored 26 points, Jrue Holiday had 19, while Grayson Allen added 18.

The Bucks are clear favorites, especially if Middleton plays, which should happen. The spread on the hosts is -7.5 points, and that seems perfectly fitting to the current situation. The Lakers’ game isn’t as convincing as before, and they struggle to provide high-quality performances. On the other side, the Bucks are pumped up and want to erase the recent defeats. A triumph over the Lakers would be a morale-booster, which is why we predict them to smash the big rivals and get back on the winning track with style.