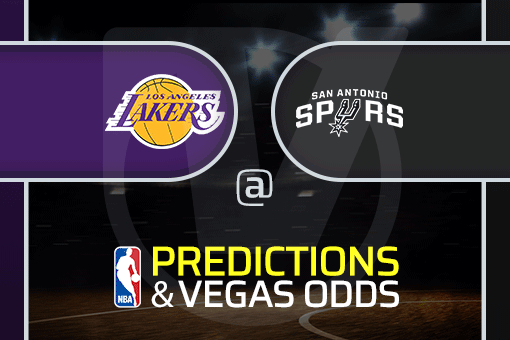 Looking for the latest Lakers vs Spurs prediction? Look no further Vegas Odds has you covered.

This is also the second night of a back-to-back so look for these two teams to be tired and production to be down.

LA is 21st in the league in opponents’ ppg giving up just 110ppg.

San Antonio on the other hand gives up 120 ppg to opponents on the season, good for 30st in the association.

This is a matchup between two of the league’s worst teams at the moment.

Lakers star Anthony Davis has been on a tear as of late. Playing some of his best basketball in recent memories. Davis is averaging 26.4 ppg this season. Putting up 37 points with 21 rebounds in his last game versus Phoenix.

On the other hand, the Spurs have been a bit of a mess this season. Deep in a rebuild, San Antonio is going through growing pains.

The Spurs have been led by young stars Keldon Johnson and Devin Vassell who are averaging 20.4 and 20.6 ppg, respectively.

These two teams play with the highest paces in the association. LA is 2nd in pace while the Spurs are 6th in pace.

Expect this matchup to be high scoring due to the pace. But be careful as this is a back-to-back game meaning there could be tired legs out there.

The key to deciding a winner in this game will be the Spurs’ ability to stop Davis. But… no one has been able to do that lately.

The betting line is sitting at 226 for total points in this contest.