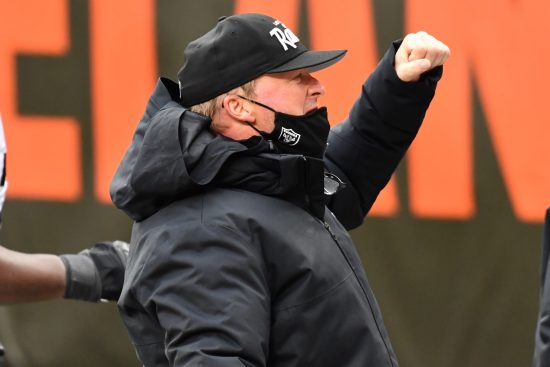 The Las Vegas Raiders have been reportedly slapped with an $500,000 fine for “brazen and repeated violations of protocols,” referring to covid-19 health measures, ESPN sources revealed, following a report by Yahoo Sports on Thursday night.

In addition, Raiders Coach Jon Gruden will have to pay $150,000 for individual infringements of the same safety protocols, the media added. The Raiders are not coming in the cross-hair of the league’s safety regulators for the first time either.

The team has already been fined $250,000 once before, and slapped Gruden with another $100,000 fine for failing to wear his mask properly during NFL Week 2, in the team’s home opener.

The team was also fined another $50,000 for allowing non-credentialed employee access the locker room after the game’s end. Overall, the Raiders have been racking up penalties quick. Among those fined were Darren Waller and Derek Carr.

Players appeared at a Waller Foundation charity event on October 5 without masks which prompted a swift response from the NFL. So far, the team has reached $1.185 million in fines for violating a variety of covid-19 protocols, a sizeable sum and the league’s worst record holder for such transgressions.

Las Vegas Raiders Have Experience with the Virus

The virus has been costly for the Las Vegas Raiders, not only because of the fact that the league and team are losing on the financial end.

For example, the team’s last week game against the Tampa Bay Buccaneers was moved to an afternoon slot and it wasn’t sure it would happen until a very last-minute clearance from health authorities.

Meanwhile, Trent Brown has tested positive for covid-19 and placed on the reserve list for a second time this year. The first time Brown tested positive, players who were deemed as risk contacts, including Damon Arnette (cornerback), Kolton Miller (left tackle), Denzelle Good (left guard), Rodney Hudson (center) and Gabe Jackson (right guard) all had to go on the reserve list and self-isolate.

Coach Gruden, though, argued that if anything the Las Vegas Raiders have been at the forefront of “crushing the virus.” A lot of things have been said and done, the coach added guardedly, but the truth remained that the Raiders are on “the cutting edge of beating the virus,” he concluded.