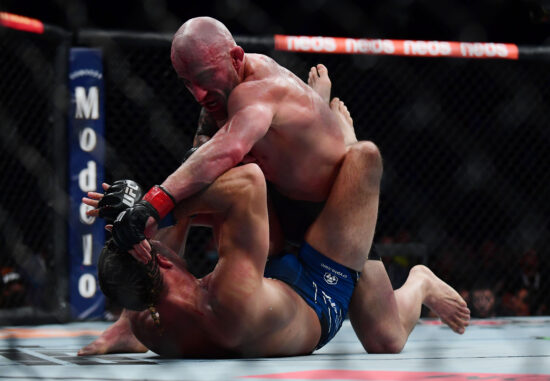 Round three between Alexander Volkanovski and Brian Ortega for the featherweight title at UFC 266 will go down as one of the best rounds in mixed martial arts history.

The pair came into Saturday’s main event with a hate-fueled rivalry, however, following 25-minutes of stunning action – mutual respect was earned.

Following the obligatory hype-building introduction from legendary octagon announcer Bruce Buffer, UFC 266’s main event began with both featherweights feeling one another out.

Volkanovski was clearly looking to find his range early while Ortega opted for a series of low kicks.

As round one progressed, it became clear that the challenger was the fighter who was on the back foot.

Looking to build on the opening five minutes, the champion came out firing again in round two. After racking up a series of significant strikes it was obvious the Aussie would be 20-18 across the judge’s scorecards.

As both fighters climbed off their stool to begin round three, most fight fans would have been expecting much of the same – however, what followed can only be described as remarkable.

“F**k the belt,” Ortega told Jon Anik earlier this week (as quoted by MMA Junkie). “I’m coming for his head.” – and my word did he mean it.

Although the third round opened in a similar fashion as the two rounds prior, the midway point saw Ortega counter from nowhere to unleash a guillotine attempt.

Volkanovski was visibly losing air and seemingly ready to tap – however, after somehow managing to withstand Ortega’s attempt, the champion was able to escape, roll the American only to find himself subjected to yet another submission attempt from the challenger – this time a tight-looking triangle.

Once again – somehow able to escape, it was evident Volkanovski would not be tapping to anyone this weekend.

After rallying to force Ortega to give up on his second submission attempt, Volkanovski managed to find himself in a top mount position which he took full advantage of.

Unleashing an absolute barrage of grounded strikes, including a series of viciously heavy elbows, the champion looked odds-on-favorite to finish the fight.

With just seconds left in the round, referee Herb Dean watched on as Ortega desperately covered up – set to step in and wave the fight off, to fans’ surprise Dean opted to let the bell sound out – saving Ortega at the death.

Following what was a truly incredible fight, with quite possibly the best five minutes in UFC title fight history, fans have reacted, with one fan even calling the action on display ‘legendary’.