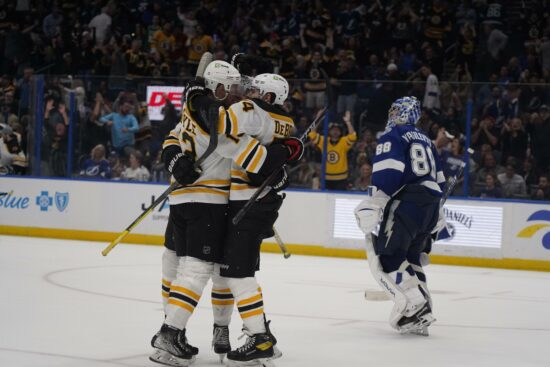 If you’re looking for the latest Lightning vs Bruins prediction and odds, then look no further than Vegas Odds.

Two of the most talented sides in the Eastern Conference will lock horns on Tuesday evening as the Tampa Bay Lightning travel to TD Garden. The Boston Bruins will have a home advantage as they look to chase down the New Jersey Devils at the top of the standings.

The Boston Bruins and Tampa Bay Lightning already both look great value to finish in the playoff spots in the Eastern Conference this term. However, the momentum throughout the season has been with the Boston Bruins, as they have gone 18-3 overall. Only the Devils have scored more goals in the East, while the Bruins boast the best defensive record.

Their record at TD Garden has been stunning, as they have won all 12 games that they have played this term. Boston has won eight of their previous ten, with their most recent success coming late last week, as they beat the Carolina Hurricanes 3-2 after overtime. David Krejci scored twice in that success.

The Tampa Bay Lightning will be looking to reach the Stanley Cup finals for the fourth straight season this term, but issues must be addressed. Defensively they have looked vulnerable already this term, as they have the worst defensive record of the sides in the top seven in the Eastern Conference.

The Lightning has maintained consistency throughout that run, as they have landed seven wins in their previous ten games. However, they will need to discover some form on the road, as they have suffered four defeats in ten games on the road this term.

This will be the biggest test that the Bruins have faced at TD Garden so far this term, but they look excellent value to get the win. That strong home advantage, coupled with the additional recovery time that they have had, makes them our pick.