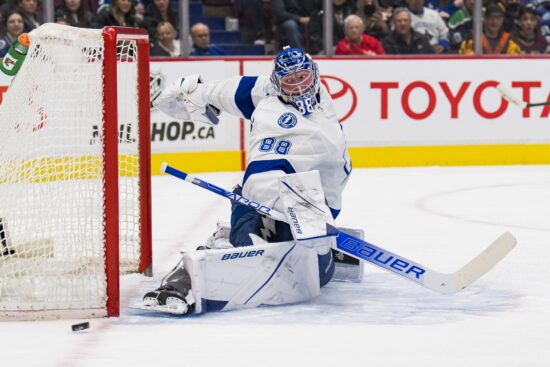 This Wednesday will see Lightning vs Kraken in a highly anticipated NHL matchup.

After finishing its Canadian tour, the Tampa Bay Lightning (38-6-15) is coming back to the US, albeit only 150 miles south of the border – their next game is against the Seattle Kraken (18-6-37) at Climate Pledge Arena.

This is the first time in the history of the Lightning that they’re playing in Seattle. They did, however, play one game against the Kraken this season. It happened last November at Amalie Arena in Tampa, when the hosts won 3-0. Online NHL sportsbooks think we’ll probably see a similar scenario happen on Wednesday evening.

Tampa is Back on the Winning Track

The Lightning played their previous four games in Canada, losing three of them. The first of those was a 7-4 loss to the Winnipeg Jets. Next came a 4-1 defeat to the Calgary Flames, followed by a loss to the Edmonton Oilers by the same score.

On Sunday evening, however, the Lightning managed to put an end to the losing streak. They defeated the Vancouver Canucks 2-1.

Tampa’s goalie Andrei Vasilevski was superb in that game, with a save percentage of 97.2%. His overall save percentage is 91.8%, which puts him in the #5 position in the list of best goaltenders in the 2021-22 season.

The win over the Canucks was their 38th win of the season, which put the Lighting in the #3 position in the Eastern Conference. When it comes to their divisional standing, they’re second in the Atlantic Division, meaning that it’s very likely they’ll get to the playoffs.

The Seattle Kraken are the worst team in the Western Conference, while in the Pacific Division, they are 26 points behind the #4 position – the one that leads to the playoffs.

Getting to the postseason probably wasn’t their main goal before the start of their inaugural season. Still, these guys would probably love to finish at least a spot above the bottom. Right now, achieving that goal doesn’t seem very likely, although this team has started showing some signs of improvement.

The thing is that after losing three games in regulation, the Kraken snatched a point off the Ottawa Senators. Then, last Saturday, they won their 18th game of the season. The team they defeated was the Montreal Canadiens. They did it by penalties after 3-3 in regulation.

In the first Kraken vs Lightning game in history, the reigning champ got a shutout win. Are we going to see the same scenario play out on Wednesday? Knowing how good Tampa’s goalie has been, such a thing definitely seems plausible.