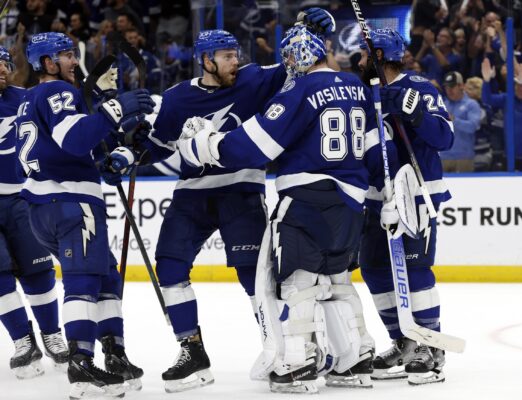 It will be a nervy night at the Scotiabank Arena on Saturday, as the reigning Stanley Cup champions forced a game seven in dramatic fashion on Thursday. However, will this Toronto Maple Leafs side finally be able to overcome their playoff curse and reach the second round with a victory over the Tampa Bay Lightning?

The Toronto Maple Leafs have endured misery in the Stanley Cup throughout recent history. They exited the playoffs at the first round stage for the fifth straight year with defeat in game seven against the Montreal Canadiens last year. Memories of that painful defeat will remain very fresh, and that is likely to create a very tense atmosphere at the Scotiabank on Saturday evening.

It could be argued that this Leafs side is much better than previous sides though, and they look much more battle-hardened to compete in the playoffs. That has been evident throughout the season to this point, and their home form has been impressive throughout the NHL season.

The Leafs have won two of the three games between the sides at the Scotiabank, which includes the 4-3 win that they picked up in game five. Auston Matthews, William Nylander, and John Tavares scored in that success against the Tampa Bay Lightning.

There are few sides in the NHL that boast as much recent experience at coming through these big tests in the playoffs. The Tampa Bay Lightning are the two-time defending champions in the Stanley Cup and have overcome a number of big challenges to achieve that feat. Their experience in fever pitch atmospheres will be put to the test on Saturday, as the Scotiabank will be rocking.

One of their biggest assets has always been raising their game when the pressure is really on them, and getting the result that they need. That was once again evident in game six of the series, as the Lightning battled back from being 3-2 down in the second period to force overtime, before then scoring the winner in overtime.

Their knack for producing big moments when they matter most always makes it hard to bet against the Lightning. The game six win could yet be the crucial moment in this series, as the Leafs would have believed that they were effectively in the second round.

This is a fascinating game seven battle between two sides with very realistic chances of winning the Stanley Cup. However, I will be siding with the Maple Leafs, as I feel this is the season when they finally end their hoodoo in the Stanley Cup and reach the second round. Furthermore, I could see over 1.5 goals being scored in the first period.