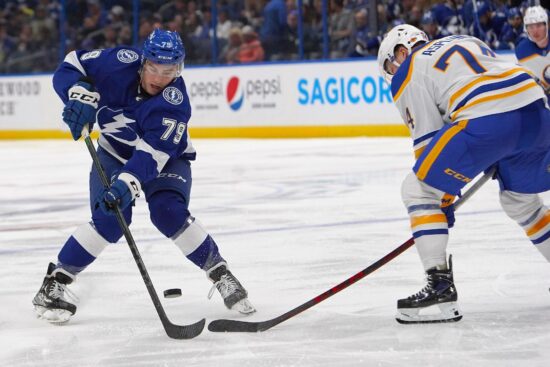 If you’re looking for the latest Lightning vs Sabres predictions and odds, then look no further than Vegas Odds.

The Tampa Bay Lightning will be looking to record a second straight victory in the NHL on Monday evening. They come into this fixture sitting seventh in the Eastern Conference standings, as they have gone 12-7-1 overall this term. Their best form has come at home throughout the season, as they have lost just three in regulation.

However, it has been a slightly different story on the road. The Lightning has gone 5-4-0 away from Amalie Arena, which does raise questions about their chances on Monday. Regardless, they were fine winners in their previous fixture, beating the St. Louis Blues 5-2 on Saturday.

It has been a very weak start to the NHL season for the Buffalo Sabres, as only the Ottawa Senators and Columbus Blue Jackets sit below them in the Eastern Conference standings. The Sabres have gone 8-12-1 this term, but the majority of their wins have been recorded at home.

Buffalo has claimed five home wins already this term, but their form over their previous ten games is a pretty sizable concern. The Sabres have lost eight of their last ten in regulation, which includes a defeat against the New Jersey Devils in their previous NHL fixture.

The Lightning form away from home is a pretty big concern coming into this fixture. They are yet to really find their feet on the road, but this could be the night for them to do so.