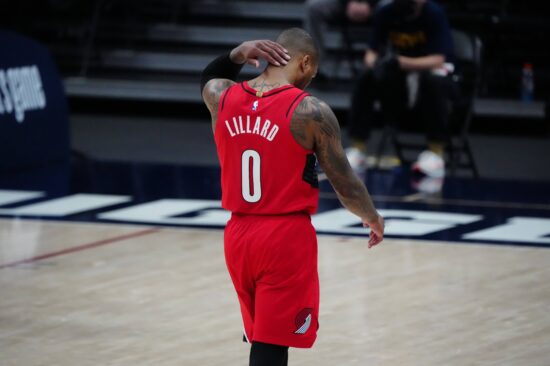 One of the biggest stars in the league, Damian Lillard, signed a two-year extension with the Trail Blazers today, putting an end to all the speculations about his future in the RIP City. Dame was allegedly close to being traded last year, but after today’s move, that surely won’t happen any time soon.

Lillard Sticks With the Blazers

Dame and the Blazers inked a two-year $122 million extension, which will end after the 2026/27 campaign. His current deal was signed two seasons ago and was one of the biggest in the league at the time. The Blazers didn’t have any doubts about Lillard and his leadership, and the franchise from Oregon is willing to keep the fantastic shooting guard until the end of his career.

The 32-year-old has spent more than ten years in Portland. He was drafted as the sixth overall pick at the 2012 NBA Draft, coming out from Weber State, as one of the hottest prospects in college.

Lillard immediately won the NBA Rookie of the Year Award, and after that, became the six-time All-Star and once a member of the All-NBA First Team, four-time All-NBA Second Team, and once a Third Team. Lillard was also voted in the NBA 75th Anniversary Team.

MVP Award More Distant Than in the Previous Years

The interesting thing before the start of this year is that Lillard isn’t among the top ten favorites for the NBA MVP award. He is between +5000 and +8000, which is for us a surprise. It seems that the bookies don’t trust Dame, and the reason for that might be his absence from the court for the majority of the 2021/22 campaign.

He played only 27 games before finishing the season due to abdominal surgery. Though, Lillard stated recently that he feels better than ever, and that all who question him shouldn’t do that.

Over the last three years, Lillard was among the best players in the NBA and was always among the elite contenders for the MVP honors. He would carry the Trail Blazers along with CJ McCollum and even reach the West Finals once, back in 2019. In all the clutch moments, it was Lillard who took the responsibility, often delivering game-winning baskets.

As for the Blazers, they aren’t considered a favorite for the title; furthermore, they are a mid-level team in the West, according to the bookmakers, who will battle for the playoffs. Odds on them winning the conference are +4500, and there are at least nine teams ahead of them, while the odds of going all the way and taking the Larry O’Brien trophy sit at +8000, which clearly signals that the Blazers don’t have a competitive team right now.

The management landed forward Jerami Grant at the beginning of the free agency, but they need more big names to make some noise in the playoffs.