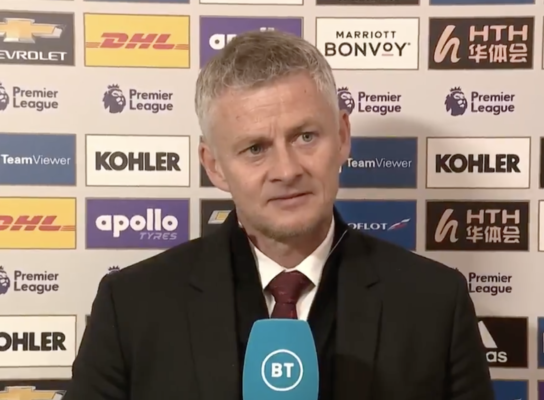 English champions for a record-breaking 20 times, Manchester United, led by manager and former striker Ole Gunnar Solskjaer, continue to be a shadow of their former selves.

Having failed to win the Premier League since Sir Alex Ferguson’s final season in charge back in 2013, the Red Devils’ domestic title drought goes on.

Despite being just seven games into the new 2021-22 season, Manchester United, who currently sit fourth in the Premier League table, have won just four domestic matches with a recent one nill defeat to West Ham United and a one-all draw against Everton being the side’s most recent results.

In light of his side’s hugely inconsistent performances, as well as poor results, Solskjaer now finds himself under mounting pressure to deliver.

With an incredibly tough run of fixtures to navigate, the next couple of months are likely to prove decisive in the Norweigan’s Old Trafford future.

During his playing days, Ole Gunnar Solskjaer, who turned out for the Red Devils from 1996 to 2007, won 14 major trophies, including an unprecedented treble in 1999.

Not only did Solskjaer lift the Champions League in 1999, but he was also instrumental in his side claiming the illustrious title.

Having been introduced into the final against Bayern Munich very late on and with the score one nill to the Germans, legendary former manager Sir Alex Ferguson’s instructions were clear – ‘get us back in the game, Ole’.

Following an incredibly late equalizer from teammate Teddy Sheringham, it was to be Solskjaer who stole the front and back pages after a 93rd-minute winner broke Bavarian hearts and in turn ensured the trophy would be heading back to Manchester.

However, despite being written in Manchester United folklore forever following his title-winning heroics 22-years-ago, Solskjaer’s managerial career now runs the risk of seeing his legacy tainted.

Having been named the Red Devils’ permanent manager back in March 2019, initial elation following an opening unbeaten run quickly turned to concern as it became apparent the Norweigan lacked tactical experience.

After now leading the Premier League giants for the last two-and-a-half years, Solskjaer has made four major semi-finals and one final but has lost them all.

Now in the new 2021-22 season, after being heavily backed in the summer transfer window by club owners the Glazer Family, which included the signing of Raphael Varane, Jadon Sancho, as well as the re-signing of club legend Cristiano Ronaldo, Solskjaer is quickly running out of excuses.

Currently on a streak that includes three defeats in their first seven matches, in all competitions, the Red Devils, who have a very tough run of games coming up, now appear to be the closest they ever have been to reliving Solskjaer from his duties.