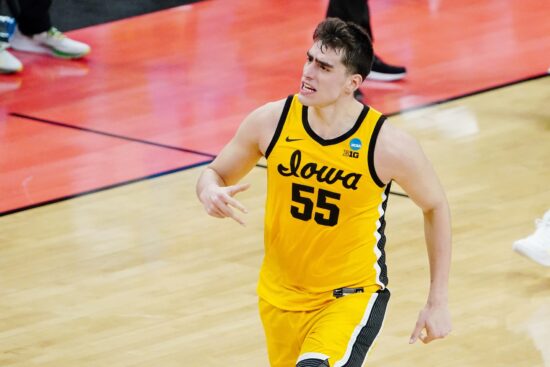 The fantastic center, who was second on last year’s ballot, finished first this time. Far ahead of the competition. Luka Garza wouldn’t receive 13 of 63 votes, once again proving his worth to the basketball community.

We are more than sure that he would have got more votes if it wasn’t for the Hawkeyes’ sensational loss in the NCAA Tournament’s second round. But at this point, that doesn’t matter.

Garza led Iowa to the No.2 seed playing 31 matches, scoring 24.1 points, adding 8.7 boards, 1.6 assists, all while shooting 44% for three and 55.2% for two. He was the undisputed leader of the Hawkeyes, who were constantly among the best teams in the country during the regular part of the season.

The 22-year old proved to be the whole package, perfecting his game and adding a few more qualities during the previous off-season. Due to constant double-teaming, Garza improved his assisting and significantly increased the percentage from the three-point territory, which was a result of his intention to become an all-around attacker.

Arguably the best player in the program’s history will have his jersey retired (No.55) and finish the stint at Iowa as the all-time best scorer with 2,306 points.

It will be interesting to see how he goes at the upcoming NBA draft, with just a few experts predicting him being selected in the first round. Many believe that his athleticism isn’t enough for the NBA, but others share the opinion that Garza’s basketball intelligence will earn him a spot among the pros.

Juwan Howard Gets the Coach of the Year Honors

Howard, who became Michigan’s legend once playing, extended the legacy by bringing one more honor to the school – the AP Coach of the Year award. With 35 votes out of a possible 63, he left Gonzaga’s Mark Few behind (16 votes) and Alabama’s Nate Oats and Baylor’s Scott Drew, both having five votes each.

The two-time NBA champion who took over the Wolverines in 2019 immediately made a noise in college basketball, making one of the best teams in the country and creating foundations for what promises to be a factory for manufacturing NBA players.

In his second year as a head coach, Howard managed to bring the team to the Elite Eight and be the regular-season conference champion, showing vast potential. He wasn’t only a great coach but also proved to be very successful when recruiting players, bringing several solid talents to Michigan. Keeping in mind that Howard is practically at the beginning of the road, many predict this program to become one of the strongest in the NCAA.

Wolverines ended the season as the No.4 in the AP rankings and enjoyed a nice ride in the NCAA tournament until the Elite Eight upset against the UCLA Bruins, once they lost 51-49. It was a tough and fierce game that saw UCLA winning only because of Johnny Juzang, who had a marvelous performance.