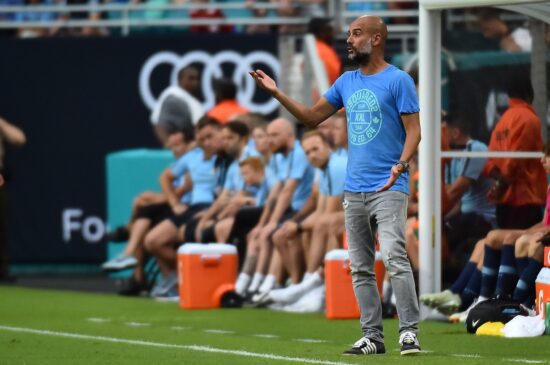 There aren’t many greater games in England than the one between United and City. The animosity between the two clubs and their fans is enormous, especially since City began winning the trophies over the past 10 years.

Expect fireworks at Old Trafford on Saturday afternoon because both sides are going after a win.

I don’t know what force keeps Solskajer on United’s bench. The Norwegian is making cardinal mistakes that already cost this team a bunch of points, and that’s why the Red Devils’ chances to win the EPL are lower and lower.

The defense is terrible, with only one clean sheet in the past 10 matches. Just to remind you that United has world-class players in the backline who play for the top national teams, like Maguire, Varane, and Shaw.

On the side, the offense relies upon Ronaldo with occasional flashes coming from other players, most frequently Bruno Fernandes. Also to mention, that six of the last seven games United played saw over 2.5 goals.

City After Three Points and a Morale-Boost

The elimination from the EFL Cup against West Ham and a defeat in the EPL at home to Crystal Palace shook the morale of the Citizens’ fans. Wednesday’s win over Club Brugge in the UEFA Champions League, 4-1, definitely healed those wounds, but we need to say that Man City didn’t look as it should, despite a big win.

Guardiola has problems in attack. City didn’t acquire a traditional striker, like Harry Kane or Haaland, which was their plan this summer, and now they struggle against teams who fill in the box and park the bus in the goalkeeper area.

That is why you won’t find a notable pattern in City’s results. They either win very convincingly, with four or five goals scored, or lose narrowly like against West Ham and Palace, where they couldn’t break the rival’s lock.

The last five head-to-head games all saw under 2.5 goals, and both teams not to score. Also, during that stretch, United posted three wins, City one and one match was without winners.

United’s struggles are far worse than City’s, which is why we give a slight edge to the guests when it comes to winning this event. After seeing the Red Devils lose 0-5 to Liverpool, I simply don’t trust them anymore.