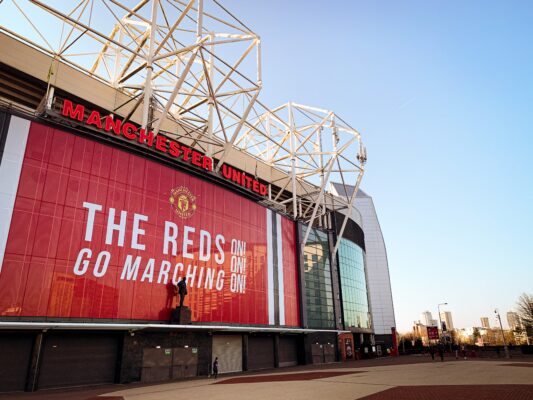 Photo via Nat Callaghan on Unsplash.

It has been a desperate start to the new Premier League season for Manchester United, as they sit bottom of the English top-flight for the first time since 1992. The bad reading doesn’t stop there for United fans either, as they have suffered seven away defeats for the first time since 1936, and Erik ten Hag has made the worst start by a United boss in over 100 years.

The disastrous start has seen United cut to +2000 to be relegated with BetOnline; the shortest they have ever been since the Premier League started. However, there is still time to turn things around, as the transfer window remains open. Below, we will look at the latest odds for new potential signings and how likely a deal could be.

The odds below are all taken from Offshore sites.

One of the big transfers that United have been linked with throughout the summer is Barcelona’s Frenkie de Jong. The Red Devils were extremely short in the betting to get their man just a month ago. However, Barcelona’s stance regarding the deal has seen United drift.

The de Jong situation is made messier by the fact that the Catalonian club owes the Dutch midfielder an eye-watering amount in unpaid wages, and rumors have circulated indicating United’s reluctance to get involved in the situation. At this point, we just can’t see the de Jong moving to the Theatre of Dreams this summer.

As United’s situation continues to get worse on the pitch, they are being linked with panic moves to enhance the quality within the squad. Christian Pulisic was a name mentioned following United’s 4-0 hammering at the hands of Brentford. However, he is unlikely to be a player that United fans are going to get too excited about.

The American has scored 25 goals in 177 games for Chelsea across all competitions, and whether he improves the forward line options that drastically is up for debate. However, given United’s track record in recent seasons, this looks like a move that could potentially happen.

An option that certainly screams as a panic signing is that of Pierre-Emerick Aubameyang. The forward has only been at Barcelona since January. But the lack of forward options at United, and the financial situation at the Nou Camp, means that the Gabon international could be on the move.

The former Arsenal striker has a proven Premier League track record. But it is likely that Chelsea could be his preferred destination. He would get guaranteed playing time, and Thomas Tuchel is a coach he knows well from his time at Borussia Dortmund.

United have been linked with a number of Ajax players throughout the summer due to Erik ten Hag knowing the players at the Dutch club well. Antony was first linked with a move to Old Trafford at the beginning of the summer, and a deal did appear likely.

However, Ajax’s asking price of over $90 million has put United off making the deal happen, while Antony has also reaffirmed his stance that he is very happy in Amsterdam. United could yet panic and meet the asking price, but that appears extremely unlikely at this stage.

After the de Jong situation seemed to be coming to a messy conclusion, United should have moved on to other targets. One of the standout selections certainly would have been Wolverhampton Wanderers’ Ruben Neves. The midfielder has proven Premier League experience, and aged just 25, he fits the profile of player that United could build around.

Wolves have recently announced the signing of Matheus Nunes, who could be a like-for-like replacement. But, United have been too slow to act on the Neves deal, and it’s unlikely that the Midlands side will sell now the season has started.

The latest midfielder that United have been linked with is Real Madrid’s Casemiro. In truth, this deal makes a lot of sense for the Red Devils, as the 30-year-old fills the position of defensive midfield, and immediately makes United a much more resilient side in the middle of the park.

Madrid could be willing to listen to offers for the Brazilian as they are well-stocked in the position, but this would be a huge deal, and it would make far too much sense for United to see it actually happen.