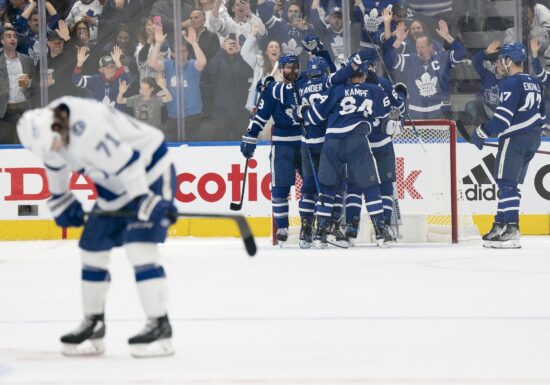 It has been an excellent two seasons in the playoffs for the Tampa Bay Lightning, but their hold on the Stanley Cup could be over as soon as Thursday. On Thursday evening, the Toronto Maple Leafs could wrap up the series with victory in game six in Tampa.

We are finally at the business end of this thrilling series between the Toronto Maple Leafs and Tampa Bay Lightning, and to this point, nothing has separated the sides. However, the Leafs are now on the brink of eliminating the reigning Stanley Cup holders following their victory in game five of the series on Tuesday.

It was potentially the best game of the series to this point, as the sides shared seven goals. But, it was the Leafs that came out on top with a 4-3 win at the Scotiabank Arena. Toronto found themselves 2-0 down after the opening period, before they scored once in the second, and three in the final period.

Auston Matthews, William Nylander, John Tavares, and Morgan Rielly scored the goals. The Leafs will be keen to wrap up the series and avoid a game seven, which was ultimately their downfall last year, as they were eliminated by the Montreal Canadiens.

All of the pressure in game six of the series will be on the Tampa Bay Lightning, as they look to get back on terms and force a game seven between the sides in Canada. Pressure is something that this Lightning side has played under for the best part of two years, and that experience ensures that they are constantly hard to write off.

The Lightning last played in a game seven last season, as they eventually overcame the New York Islanders after squandering a 2-1 series lead. The experience could be everything for the reigning Stanley Cup champions coming into this fixture.

The Lightning won the last game between the sides at Amalie Arena in commanding fashion, as they won 7-3 earlier in the week. However, they have also been beaten at home in the series, as they lost 5-2 in game three.

This is a huge game in the series, as a game seven is likely to favor the Lightning given the recent experiences of both sides. However, I believe the series could be over on Thursday evening, as the preference is for the Leafs. Meanwhile, it could be another game with over 1.5 goals in the opening period.