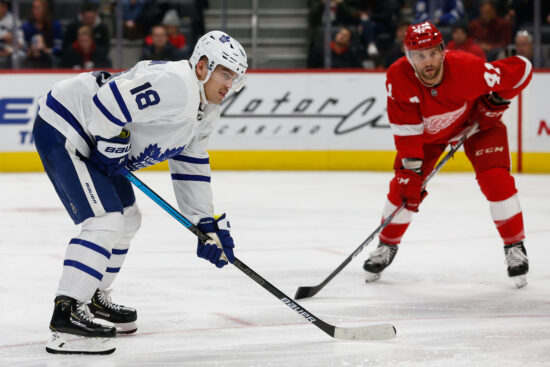 If you’re looking for the latest Maple Leafs vs Red Wings predictions and odds, then look no further than Vegas Odds.

Two of the top teams in the Eastern Conference collide on Monday evening, as the Detroit Red Wings look to maintain their excellent run of form. However, the Toronto Maple Leafs have turned a corner in recent weeks and will be looking for a fourth straight success.

There should be a fascinating game in the Eastern Conference on Monday evening, as two of the in-form teams clash. The Toronto Maple Leafs will be on the road, as they look to record a fourth straight victory. Toronto has been in excellent form over their previous ten, as they have won six, and have lost just once in regulation time.

The Leafs maintained their recent strong run of form in their previous fixture, as they landed a 4-1 victory on the road against the Pittsburgh Penguins. Auston Matthews was in excellent form in that game, as he scored once and registered two assists. Meanwhile, further efforts were added by William Nylander, Mitch Marner, and Pontus Holmberg.

Meanwhile, the Detroit Red Wings won’t be coming into this fixture fearing the Leafs, as they have been in excellent form themselves over recent weeks. Detroit has also won six of their previous ten, but they come into this fixture having recorded four straight wins in the NHL.

The Red Wings only just managed to hold onto that winning record in their previous fixture, as they needed a shootout to see off the Arizona Coyotes. The teams were locked at 3-3 at the end of regulation. Filip Hronek, Andrew Copp, and Jordan Oesterle scored the goals in regulation time.

The team playing at home in this fixture has reigned supreme in each of the previous three, and five of the last six. Therefore, we find it hard to bet against the Red Wings getting the win on Monday.