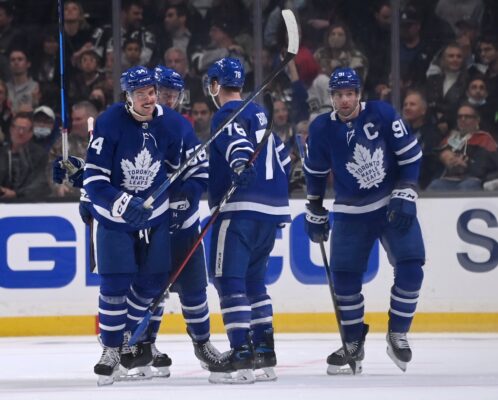 Two sides that are in hot form in the NHL meet on Friday night, as the Toronto Maple Leafs and San Jose Sharks will both be looking to record a third straight win. However, only one team will be able to achieve that feat, but who is currently favored in the odds?

Toronto Maple Leafs have been in fine form in their last ten outings in the NHL, as they have picked up eight wins during this run of games. They are certainly one of the standout teams in the Eastern Conference this season and are rightly among the leading contenders in the Stanley Cup 2022 betting. However, fans will be keen to not get ahead of themselves, as they have so often fallen at the first hurdle in the playoffs. Their recent form is certainly making it hard not to get carried away though, as they have been beaten on just two occasions in their last ten games.

They have looked much better defensively this season, which was a huge area for improvement last season. Toronto comes into this game on Friday having won for the second straight game. The Leafs hammered the Los Angeles Kings 6-2 on the road and found themselves 5-1 up at the end of the second period. Their sixth goal was added in the final frame. Auston Matthews, Pierre Engvall, John Tavares, and Alexander Kerfoot were all among the scorers for Toronto.

The San Jose Sharks will have home advantage on Friday evening, as they look to continue to build momentum at this stage of the season. San Jose have won their last two, which has improved their record over their last ten outings to 4-5-1. The five defeats in their last ten games would be a slight concern, especially when they are trying to drag themselves up the Pacific Division standings.

They come into this fixture down in fifth in the standings, which means work needs to be done if they are to reach the high-flying Flames. However, they should be confident as they won their last game in the NHL against the Ottawa Senators. It was a big win for the Sharks in that game, as they scored three times in the final period to wrap up a 6-3 success. Timo Meier, Logan Couture, and Tomas Hertl all had their names among the scorers in the comfortable win.

Both teams should be full of confidence coming into this game, as they have won their last two. However, the Leafs have shown in their last ten games that they are a difficult team to beat this season, and we give them the narrow advantage in San Jose.