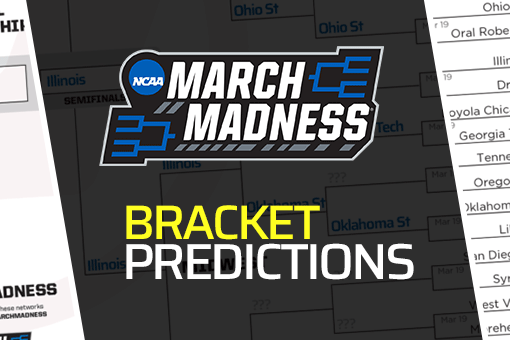 Without breaking down or picking every matchup, here is an overview of how the NCAA March Madness bracket (2021) will play out in each region and in the Final Four.

The Gonzaga Bulldogs are the top overall seed in the NCAA Tournament and should have very little trouble getting through the West. Even though upsets always happen in March, Gonzaga is a team that just doesn’t feel like they can be beaten in the region.

The Iowa Hawkeyes are the number two seed in the West, and taking them to get to the regional final is another safe pick. Both Kansas and Virginia are in the West, and these teams could be impacted by COVID-19.

The biggest upset in the West will take place in the 6-11 game as the winner of the Drake/Wichita State game will knock off the USC Trojans.

The East Region could be one of the most exciting regions in the March Madness 2021 bracket, with top-seeded Michigan looking vulnerable of late. Alabama is the number two seed, and they also feel like a team that could be upset.

Look for the UConn Huskies to shock Alabama in the second round, creating a path for the Texas Longhorns in the bottom portion of the bracket. Michigan will navigate its way to the Regional Final, creating a terrific matchup.

Texas won the Big 12 Championship this season, and the Longhorns are playing well. They are the pick to win the East Region.

The Baylor Bears are the number 1 seed in the South and the number two overall seed. They face a potentially dangerous matchup in the second round with either Wisconsin or North Carolina.

Ohio State is the number two seed in the South, and it feels like the Buckeyes have a pretty clear path to the Regional Final. Texas Tech and their defense could present a challenge as the sixth seed, but the Buckeyes will prevail.

Ultimately, Baylor will escape an upset and will meet Ohio State for the right to advance to the Final Four. This will be one of the best games of the tournament, but it will be the Ohio State Buckeyes moving on.

Houston is the number two seed in this region, but don’t be surprised to see West Virginia advance to the Regional Final. The Cougars will see the Fighting Illini as Illinois will sneak past Oklahoma State.

Illinois and Houston will be a great game, but the Fighting Illini will win and advance to the Final Four.

The Final Four Field of Gonzaga, Texas, Ohio State, and Illinois should be one of the best weekends of college basketball in recent memory. All four of these teams are loaded with talent, but these are also teams that have not won a title in many years.

Gonzaga and Texas should be an interesting game, but the Bulldogs simply have too much talent. Ohio State and Illinois will meet up for the fourth time this season, and it will be the Fighting Illini that come up with another win over the Buckeyes.

That sets the stage for Gonzaga-Illinois in the title game, and the first team to 100 might be the winner. Both teams can really score the basketball, and there will be many future NBA stars on the floor.

In the end, it will be Mark Few and the Gonzaga Bulldogs that cut down the nets and win the 2021 NCAA Men’s Basketball Championship.

Here are the above predictions in bracket form: