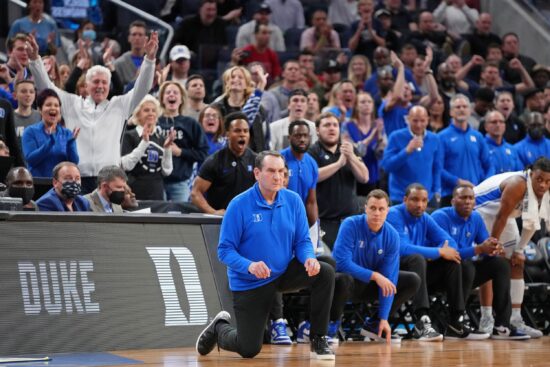 The Mike Krzyzewski retirement tour keeps going, and at this point it looks like a K.I.S.S., Rolling Stones, Brett Favre, or Tom Brady farewell trip that will never end. The network execs at CBS have to love Coach K getting a chance to make his 13th Final Four in his last season on the bench, but his Duke Blue Devils have a huge challenge against an Arkansas Razorbacks squad that just knocked off the #1 overall seed Gonzaga 74-68.

There were a lot of people that considered Arkansas a fluke entrant into their second straight Sweet 16. The Razorbacks heard the talk all week that the main reason they advanced from the first weekend of the tournament was that they got the best draw in the field, beating #13 seed Vermont 75-71 and then #12 New Mexico State 53-48.

The whispers that the Razorbacks heard leading up to the matchup with Gonzaga definitely left a chip on their shoulder, reminiscent of last year’s trip to the Elite 8. Instead of beating #15 Oral Roberts as they did in the Sweet 16 last year, the Razorbacks’ #14 unit in adjusted defensive efficiency swarmed the Bulldogs and held them to 68 points – 20 below their best scoring output in the country of 88.3. Yet the Razorbacks are still underdogs according to Arkansas vs Duke betting odds.

At least Arkansas coach Eric Musselman only has a day to hear about how his team is doomed on the Coach K Farewell Tour instead of a week like he did leading up to the Gonzaga game. Every team has momentum at this point of the season, but it’s really hard to go against a Razorbacks team that features 6’10”, 240-pound Jaylin Williams working his way into an NBA lottery pick position. Williams had his third straight double-double on Thursday, scoring 15 points and corralling 12 rebounds against the Gonzaga front line that featured 7’2 Chet Holmgren and 6’10” Drew Timme.

Is the Hardest Part in the Rear View for Duke?

Duke was just a PK play in Vegas Odds during Thursday’s 73-78 win over Texas Tech, who had been one of the hotter teams in the country. The Red Raiders forced multiple turnovers from Duke out of the gate and got multiple easy baskets to build an early lead, but Duke showed the poise that comes with having a coach with 40+ years of experience at the helm as they battled back to a 78-73 win.

The Blue Devils offense won’t get the credit they are due for hanging 78 on Texas Tech, a number that would have been in the 100s or at least the 90s against almost other defense in the country. Arkansas did a good job of stifling Gonzaga’s #1 adjusted offensive efficiency to 68 points on Thursday, but now they have Duke’s #2 ranked unit in that same category with just a day in between.

Hopefully, Arkansas didn’t knock that chip off their shoulder, because it’s going to be out in full force on Saturday night. There were some people who didn’t want to see Gonzaga coach Mark Few get knocked out of the tournament as he continues his long search for the 1st National Championship for the program. Those same people are going to plead for the Razorbacks not to play the villain two games in a row.

Arkansas’ Jaylin Williams is a legit talent, but Duke’s 7’0, 242-pound center Mark Williams presents more of a physical challenge than Timme and Holmgren of Gonzaga did. The Razorbacks lose a big part of their game when Williams is neutralized, and Duke’s 6’10 swingman Paolo Banchero is just going to dominate this matchup – as he has in scoring 17+ in 8 of the last 9. Talent + karma has to lead the Blue Devils to this one.