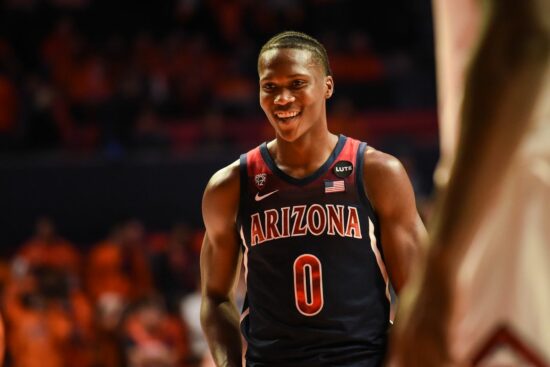 The Arizona Wildcats narrowly avoided joining Baylor as a #1 seed to drop out of 2022 March Madness in the 1st weekend. The Bears were upset by North Carolina, but Arizona survived a late missed foul call, and a last-minute dunk that barely missed regulation as they outlasted TCU 85-80 to wrap up the round of 32.

The Houston Cougars have to come into Thursday’s contest with some confidence. UH rolled through a UAB team that probably didn’t deserve to be in the NCAAs 82-68 in round one, and then shut down Kofi Cockburn and Illinois in a 68-53 victory on Sunday. UH is no slouch against even a #1 team, as the Wildcats have won 11 of their last 12.

As long as Houston can get the win over the 7’0, 285 pound Cockburn and Illinois, there’s almost no better warmup game ahead of a meeting with the size of Arizona. The Cougars held the Illinois All-American to 19 points and 8 rebounds, which does give the team some confidence ahead of a matchup with Arizona’s 7-foot duo of Christian Koloko and Oumar Ballo not to mention 6’11” Azuolas Tubelis.

What was somewhat surprising about Houston holding Cockburn to a respectable outing is the fact that the Cougars look extremely undersized on paper. The Cougars have one player over 6’8″, Arizona has four players over 6’10”.

There is no way Houston should be overlooked on Thursday, as they are #2 in the KenPom Rankings behind an offense and a defense that are both in the top 10 in adjusted efficiency. Five different Cougars are averaging in double figures counting the AAC Tournament and although Arizona is tough – a lot of people thought Houston was worthy of a #3 or maybe even a #2 seed.

Lloyd Heading to the Inevitable

If Duke’s Mike Krzyzewski doesn’t lead his team to a National Championship to ride out as a Cinderella in his last year coaching, the 2nd best storyline would be Arizona coach Tommy Lloyd meeting up with Gonzaga head man Mark Few. Lloyd spent 20 years as an assistant coach with the Bulldogs, but has guided Arizona to a 33-3 record in his first year in Tuscon.

While the Lloyd vs. Few angle would be great, Arizona cannot take Thursday’s game for granted. In fact, some would say the Wildcats are playing on borrowed time after needing OT to beat TCU on Sunday. The Wildcats defense gave up a 12-0 run at one point in the second half to TCU, and a majority of people agree that Arizona got away with a foul at the end of regulation that would have sent TCU to the free-throw line for the game-winners.

Regardless of if Arizona got some officiating breaks vs. TCU in the round of 32, they are still here and are a tough out moving forward. The Wildcats have arguably the best inside-out duo left in the tournament with Pac-12 Player of the Year Bennedict Mathurin scoring 30 vs. TCU and conference defensive POY Christian Koloko scoring 28 while grabbing 12 boards and blocking 3 shots. That’s against a TCU team that had a top 16 defensive efficiency as well,

The line for this contest has Arizona just a -1.5 favorite. That’s a very interesting number to dig into, and it’s on the low side which means oddsmakers are trying to lure bets to the Wildcats in lieu of a Houston win. The name of the game in this contest is size though, and the Cougars are very underwhelmed vs. this Arizona squad full of giants. From tough shots in the paint to a huge rebounding edge, the Wildcats being so long gives them the nod here.