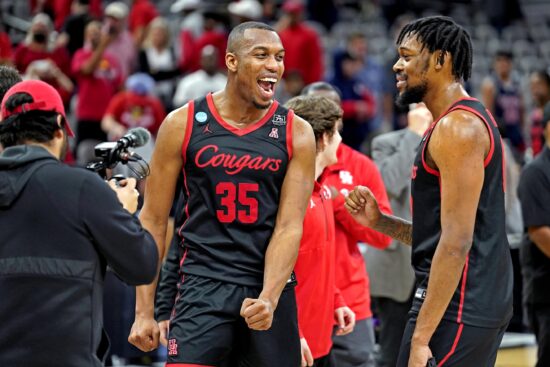 Saturday’s matchup between the #5 Houston Cougars and the #2 Villanova Wildcats could be considered the “underrated bowl.” The Cougars got a 5-seed in the tournament when that easily could have been at least #3 considering Houston rolled to the AAC Championship and has won 12 of their last 13. At the same time, Villanova was just +1400 to win the National Championship heading into the Sweet 16, behind 6 other teams such as #3 seed Texas Tech, #4 UCLA, and even these #5 Cougars.

Cougars Need to Be Taken For Real

Keep going against Houston and keep losing. Many experts thought that the Cougars getting a #5 seed on Selection Sunday was a travesty, after all, what more does this team have to do besides rattling off three straight to capture the AAC Championship as part of 9 wins in their last 10 games heading into the NCAA Tournament.

Houston has kept their momentum going during 2022 March Madness, rolling through UAB in the always dangerous #12/#5 matchup in round one (82-68), dominating Big Ten regular-season co-champ Illinois 68-53 last Sunday, and then handing Arizona just their 2nd loss in the last 19 games in Thursday’s 72-60 upset.

There’s a ton to like about Houston heading into the Elite 8, the first of which is that this is an experienced team that made the Final Four last year before losing 78-59 to eventual champion Baylor. The Cougars also have a bit of a home-court advantage, playing in their home state of Texas at the AT&T Center in San Antonio. Finally, the Cougars are up to #2 in the KenPom Rankings, sitting in the top 10 in both adjusted offensive and defensive efficiency. This team is no fluke.

It’s a rare matchup where in the Houston vs Villanova matchup, the Wildcats’ opponent has more (or at least equal) recent experience going deep into the tournament than they do. Jay Wright took his team to the Sweet 16 last year and was knocked out in the 2nd round in 2017 and 2019, but he also has a couple of deep runs sandwiched in there winning the 2016 and 2018 National Championship.

Villanova looks like they could be headed to another possible National Championship game in 2022. #1 seeds have been dropping like flies in this March Madness event, and the Wildcats have played two consecutive solid games against good foes out of the Big Ten conference. Villanova beat Ohio State 71-61 last Sunday before toppling OSU’s rival Michigan 63-55 on Thursday night.

Villanova’s defense has done a good job the past couple of games against big men from the Big Ten, holding Ohio State’s EJ Liddell to 17 points and 6 rebounds and Michigan’s Hunter Dickinson to 15 points – even though he did have 15 rebounds. Saturday’s contest is going to be more of a small-ball game, as Houston has only one player over 6’8″ and Villanova has nobody over 6’9″

There really is value on both teams here, the Cougars giving -2 points despite ranking very high in adjusted analytics but Villanova with the chance to easily win outright behind the postseason tested Jay Wright and the 2X Big East Player of the Year Collin Gillespie. Ultimately this comes down to just another game that pundits don’t think Villanova can win, one of the most underrated #2 seeds in recent memory.