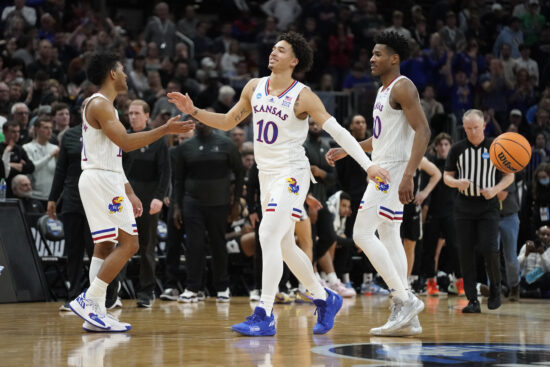 The Midwest Regional Final comes down to a gritty battle between Big-12 powerhouse and #1 seed Kansas and a surprising and surging #10 seed Miami.

Kansas took down #4 seeded Providence after leading comfortably for most of the game. The Friars gave them a bit of a scare near the end but the Jayhawks ultimately prevailed. Miami defeated #11 seed Iowa State comfortably, making their NCAA Tournament wins in the last two rounds look easy. Miami made their first-ever Elite 8 and will attempt to set another record with a win over Kansas.

#10 seeds like Miami have made the Final Four a total of one time.

Kansas has been Here Before

Kansas is looking to return to the Final Four for the first time in four years and 6th time since 2002. The Jayhawks dominated Providence for most of their matchup on Friday before the Friars mounted a major comeback and made it a close game. In the end, Kansas escaped with their third win of this year’s tournament and a chance to make yet another Final Four.

Kansas was once again led by Arizona State transfer Remy Martin who finished with 23 points, now with 58 total points in the tournament thus far. The Jayhawks also got a 16 point, 11 rebound double-double from sophomore forward Jalen Wilson, his second consecutive double-double. They’ll be matched up with #10 seed Miami in the Elite 8 with their eyes set on a trip to New Orleans next weekend.

Miami’s Depth is Hard to Beat

Miami blew past #11 seeded Iowa State in their Sweet 16 matchup, leading for most of the game en route to a 70-56 victory. Miami got a 27 point performance from senior guard Kameron McGusty along with double-figure performances from junior guard Jordan Miller and senior forward Sam Waardenburg. Along with his 13 points, Waardenburg was a menace all over the court racking up 8 rebounds, 5 assists, 3 blocks, and a steal.

Miami’s balanced offense with scorers all over the court combined with their heavily improved defense has made them extremely tough to beat, outscoring their opponents by 30 points in their last two tournament games. Miami will face their toughest opponent yet in a Kansas team that mirrors their balanced approach and talented roster well.

Miami has continued to surprise and impress as they made their way to their first-ever Elite 8 appearance. They showed little signs of struggle in the last two rounds and they’ll face an NCAA Tournament staple in Kansas to try and keep it going. I think the Jayhawks’ level of talent will ultimately give them the edge and end Miami’s impressive run. The Hurricanes should keep it close, but I’ll take Kansas in another close one.