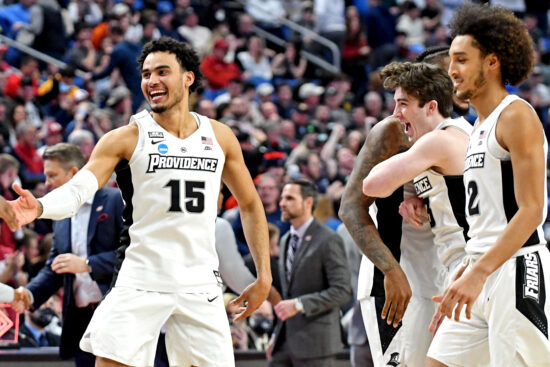 On a day with many double-digit seeds and crazy matchups, #1 seed Kansas will take on #4 seed Providence in a much more traditional Sweet 16 matchup.

Both teams are looking for their first real test of the Tournament, having faced no teams seeded higher than 9 thus far. Providence easily advanced past #12-seeded Richmond after defeating #13-seeded South Dakota State in the first round. Kansas handled business in a competitive game against #9 seeded Creighton after blowing out #16-seeded Texas Southern in the first round.

Kansas has been Here Before

Kansas has once again made the Sweet 16, their 14th appearance since 2000. The Jayhawks have become an NCAA Tournament staple, but have failed to win a title since 2008. After getting yet another #1 seed, Kansas will attempt to keep the good times rolling in the Sweet 16. They had a bit of trouble in their second round matchup against Creighton but will face an entirely different beast in 27-5 Providence.

As usual, Kansas has playmakers all over the court. Sophomore forward Jalen Wilson accomplished a 14 point, 14 rebound double-double against Creighton in the second round. Senior guard and Arizona State transfer, Remy Martin scored 20 points off the bench. Senior guard Ochai Agbaji averages nearly 20 points per game. With such a talented roster, the Jayhawks are always tough to beat in March and this year is no different.

Providence has both Skill and Luck

Some people may say Providence was lucky by getting matched up against #13 and #12 seeds in the first two rounds. That’s a bit of a falsehood considering #13 seeded South Dakota State boasts the nation’s second-best scoring offense, behind only #1 overall seed Gonzaga, and was held to just 57 points by Providence. Meanwhile, #12 seed Richmond upset scorching hot Big Ten champion Iowa in the first round before being pummeled by the Friars on Sunday.

Where Providence’s luck truly comes into play is their win rate in close games. An incredible 18-2 in games decided by 10 points or less, the Friars have been nearly unbeatable in close games. These close game victories allowed Providence to put up an impressive 27-5 record, despite ranking outside of the Top 25 in metrics like NET and KenPom. Providence is led by an experienced trio of upperclassmen, junior Jared Bynum, and seniors Nate Watson and Al Durham, who all average over 12.5 points per game.

Both of these teams are experienced and competitive with the results to prove it. I spent the regular season feeling wary of Providence’s success but have been swayed by their NCAA Tournament performances. I think Providence can hang tough with any team in the country. That being said, I think that Kansas’ level of talent and experience will ultimately prove to be too much for Providence, who very well could continue to prove me wrong. I like Kansas to win this one on their way to another Elite 8 appearance.