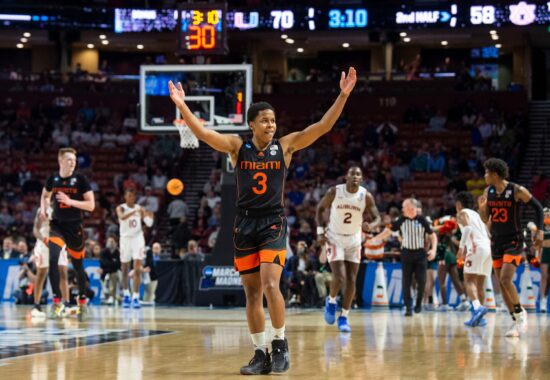 It’s a battle of weather system mascots and double-digit seeds as the #10 seed Miami Hurricanes face off against the #11 seed Iowa State Cyclones.

Miami snuck past #7 seeded USC in the first round before dominating #2 seed Auburn by a score of 79-61 on Sunday. Now, as the higher seed for the first time this tournament, Miami will look to use Iowa State as a stepping stone for their first-ever Elite 8 appearance. Iowa State notched off a couple of upsets of their own, defeating #6 seeded LSU and #3 seeded Wisconsin in low-scoring 5-point games.

#10 seeds like Miami have advanced to the Elite 8 a total of eight times. #11 seeds like Iowa State have made it a total of nine times.

Miami has Scorers All Over

Miami once again saw double-figure performances from four starters against Auburn. These four, Isiaiah Wong, Kameron McGusty, Charlie Moore, and Jordan Miller all also average 10 or more points on the season. With reliable scoring options across the court and an above-average defense, Miami is not an easy team to beat.

Miami’s worst losses come in games where they give up way too many points, such as a 96-64 loss to Alabama earlier in the season. Against a low-scoring team like Iowa State, the Hurricanes should just need their usual shots to fall to avoid such an outcome. Miami’s defense will be the least predictable factor, giving up less than 70 in their first two tournament games but over 90 in multiple regular season match-ups.

Iowa State’s season has been tumultuous up and down ride. After going an abysmal 2-22 last season, Iowa State shocked everyone when they got off to a 12-0 start this year. The Cyclones then started Big-12 play on a 4-9 stretch before a streak of 4 wins and then 3 losses. Since starting the tournament, Iowa State’s defense has been locked in, holding LSU to just 54 points and a high-scoring Wisconsin team to only 49.

Against a team with multiple scorers like Miami, Iowa State will need some offense of their own in case they find themselves going up against a hot hand or two. Leading scorer Izaiah Brockington has struggled to find his rhythm as of late, shooting just 28.6% from the field in his last five games. The Cyclones have averaged just 49.6 points over their last 5 games as a team and will undoubtedly need a far more balanced offensive performance against a team like Miami.

Both of these teams defied the odds with back-to-back upsets to start out the NCAA Tournament. Now both looking to be a rare double-digit seed in the Elite 8, they’ll match up against each other in what should be a very well-fought contest. I find myself concerned about Iowa State’s lack of offense, and I struggle to see them keeping up for 40 minutes with a Miami team that has four players averaging double figures, even with their stifling defense to keep the Hurricanes in check.